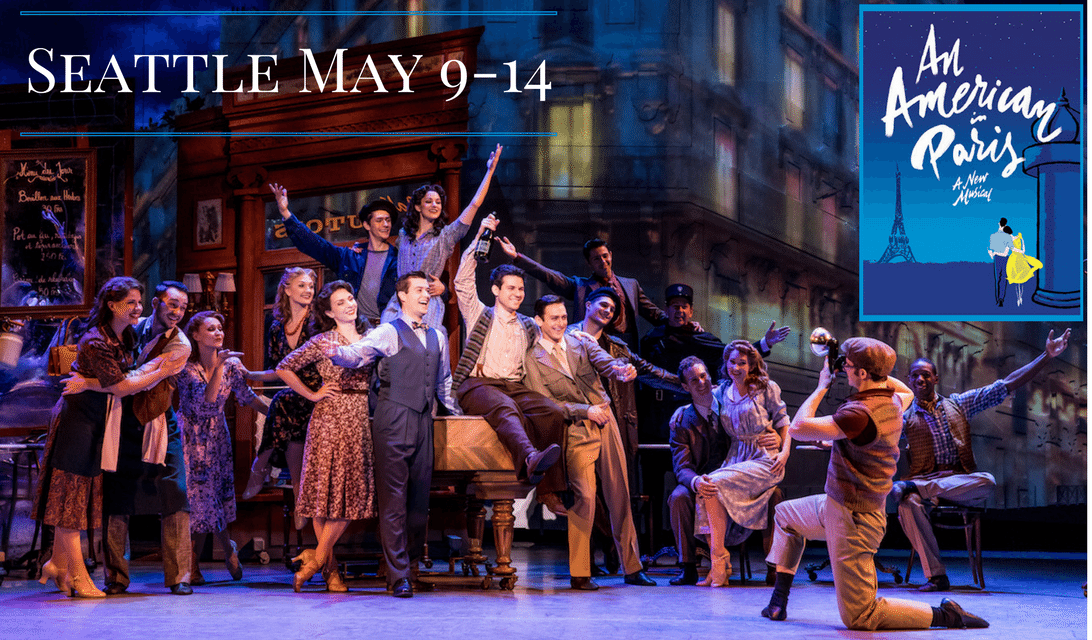 I was provided tickets to AN AMERICAN IN PARIS facilitate this review. However, all opinions are my own.

THE PARAMOUNT THEATRE 911 Pine Street Seattle, WA 98101 directions ›
Reserved Seating Tickets start at $30! (not including fees)
Buy tickets at stgpresents.org, tickets.com, and select Ticketmaster locations. You may also purchase tickets by calling 1-800-745-3000 or purchasing them in person at The Paramount Theatre Box Office (Monday through Friday, 10 am to 6 pm).

AN AMERICAN IN PARIS is based on the Academy Award-winning musical from 1951 and is the winner of 4 Tony Awards, including best choreography. For me, it was refreshing, as this is the first musical I’ve seen in quite a while that I hadn’t already seen before, so I went in completely blind to the plot and the music!

Taking place in Paris just as World War II ended, we focus on Jerry Mulligan, an American soldier who decides to stay in Paris to concentrate on his art career. Shortly after deciding to stay in Paris Jerry runs into a mysterious young woman with whom he instantly becomes enamored. However, she is able to fade into the crowded Paris streets and disappear before Jerry can find out who she is. Jerry stops by a small cafe and meets a starving artist composer, Adam Hochberg, also an American veteran. The two become fast friends along with Hochberg’s landlord and friend, Henri Baurel. Henri is the heir to a large textile empire and is tasked with expanding the business to the USA. However, he has a secret passion to be a song and dance man and have his own Review. Henri is being pushed by his parents to propose to his girlfriend, as he is “too old not to be married,” Adam and Jerry encourage him as well.

Jerry runs into the mysterious girl again and follows her to her work and convinces her to meet him by the river Seine, and he learns her name, Lise Dassin. She is a ballerina and daughter to a famous pre-war prima ballerina. She auditions for a new ballet and Adam is the accompanist. Upon seeing Lise perform Adam is quickly taken with her as well and writes a ballet just for Lise. Lise and Jerry meet up many times at the Seine. However, Lise makes Jerry promise that they can only ever be friends, as she is already with someone else. Jerry agrees. As Jerry continues to try to break into the Paris art scene, he meets Milo Davenport, a wealthy American expat, and patron of the ballet Adam is writing. Milo helps Jerry to get the art direction job for her new ballet, the same one that Adam is writing the music for. Milo starts to fall for Jerry. However, Jerry still longs for Lise. At a gala for the investors, all three men Jerry, Adam, and Henri all discover that the woman they have been talking about is Lise… I won’t spoil how it ends!

The music that is incorporated into the show are all George and Ira Gershwin tunes, of which the standouts are definitely “I Got Rhythm,” “The Man I Love,” and “They Can’t Take That Away From Me.”  Another huge eleventh-hour song is “I’ll Build A Stairway to Paradise,” which sees Henri fantasizing about his own lavish radio city review show and features a classic tap dance routine. An AN AMERICAN IN PARIS feels like a nod to 50’s musicals, in that it contains large sections of uninterrupted ballet performances, which you rarely see nowadays. It’s not hard to see why this musical won an award for Best Choreography, as it is truly beautiful.

The sets heavily feature projections to augment the onstage set pieces, and it works to great effect, you can actually see the sunset on the Seine, and it is remarkable. Sketches come to life and form buildings or people or trees; it works very well in practice.

Overall I enjoyed the show, though I could have used a little less dancing and a bit more singing! However, for those of you who really enjoy a well-choreographed ballet, you will LOVE this.

AN AMERICAN IN PARIS runs at Seattle’s Paramount Theatre May 9th-14th and includes two-weekend matinee performances. Tickets start as low as $30! Tickets are available at STGPresents.org, Ticketmaster.com, by calling 1-800-745-3000 or at the Paramount box office. 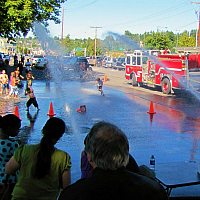