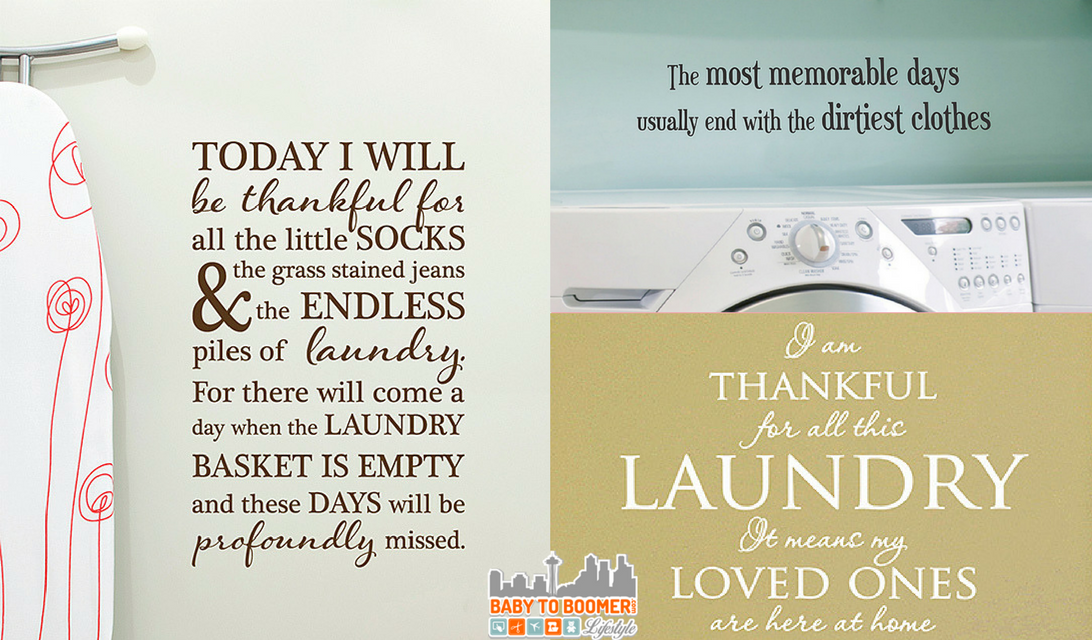 I was shopping on Zulily last week, something I seem to do much too often, and I came across several wall quotes for a laundry room and I realized they are about the truest quotes I’ve ever read. They’re versions of something I’ve said to myself many times over the years and close to the advice I try to give parents when they lament about the piles of laundry that come with each new child. Mine was always, “When the laundry is gone; it means they’re gone.”

I instinctively started to add one of the wall quotes to my cart when I realized that it would be a daily reminder of all that I have lost. I considered sending it to my daughter-in-law, but she’s not a fan of wall art quotes. So instead, I’m sharing it with you in hopes if you’re in the situation when it seems like the laundry (as well as all the other household duties that come with child rearing) are getting you down, these quotes may help you put a positive spin on it and make you realize just how lucky you are. 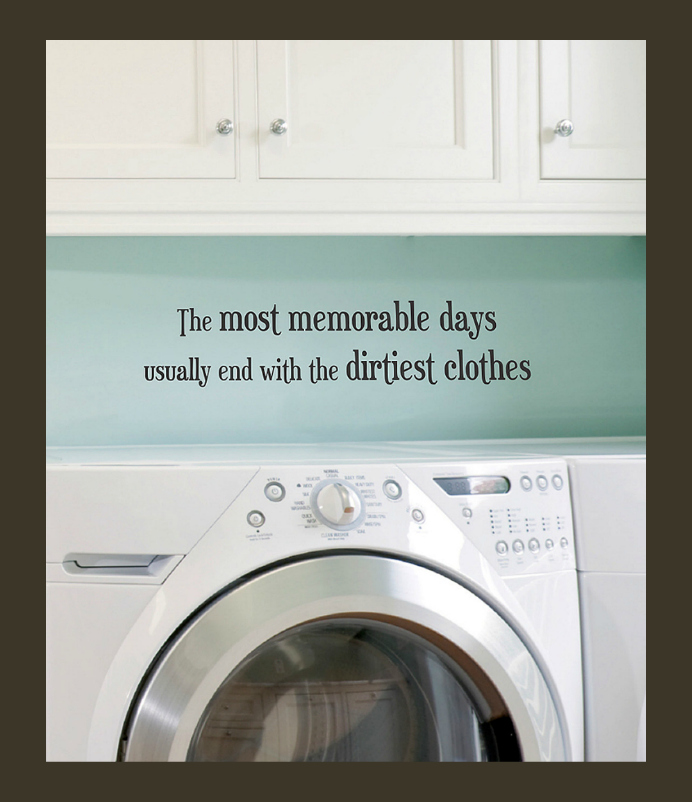 The most memorable days usually end with the dirtiest clothes – photo credit: Wallquotes.com by Belvedere Designs on Zulily

Strangely, the only time having all those extra piles made by the children was when it didn’t get done, which always seemed to happen on a “special day” where one of them HAD TO HAVE a particular piece of clothing, and we had to find alternatives. As infants and toddlers that wasn’t much of a problem. The kids would wear just about anything we handed to them. But I remember vividly as the kids got older, their fear of peer pressure made them acutely aware of what they were wearing, and thus the lack of planning on our part turned into a crisis at our family’s most stressful time of day – the morning! I’m sure we’re not the only parents who threw a dirty pair of jeans at a kid and told him to suck it up and wear them because gosh, as a kid we only had one pair of pants and they were only washed once a week (followed shortly after about our one-mile walk each way to school in rain or shine carrying a baritone saxophone).

But I’d do all those days over to have a child’s laundry mixed with mine again. I take pleasure in folding their little clothes Disney-style, with the design on the front facing out and the eyes of the characters lined up. For fun and the generous discount, I worked at my local Disney Store for five years, and folding was my specialty. But it was my dad that taught me when I was very young the Navy way, and that set me up for a life of rewarding folding. It’s my favorite household chore, and I’ve often thought about volunteering at a local drug rehab place for infants born addicted. The only thing stopping me is they use harsh laundry chemicals, and neither those babies or I should be subjected to them. I keep hoping they’ll see the light and switch to something I approve of; until then I dream of piles of clean laundry folded.

How Life’s Changes are Exposed Through Laundry

I know, I’m probably a rare breed. But my life has been played out in my laundry. My bell bottom jeans that had to be folded immediately out of the dryer with the seams lined up, so they had perfect creases down the front were replaced by straight legged jeans that had to be dried carefully or they shrunk too much so that I could barely get them over my calves. I remember my sister-in-law at seventeen washing her new Levi skinny jeans in the early 90’s and putting them on wet, so they dried to her body. She couldn’t sit or bend because she’d have a baggy knee, so she had her sisters lay her down straight legged. I’ll never forget how hard we laughed at the sight or when she showed that the jeans died her skin blue so that she looked like she was still wearing them after she removed them for the night. Ah, the vanity and what we women will go through for fashion!

Shortly after, my laundry was filled with tent-like maternity clothes and baby-to-be outfits of green and yellow. In the mid-80’s it was rare to find out your child’s sex before birth. Most insurance companies only allowed one ultrasound per normal pregnancy, so if your child wanted to be a jerk, as both of ours were, they just crossed their legs to keep you guessing until their birthday! Not long after each son’s arrival, the predictable blues and primary colors of a baby boy filled the folding table. Lots of tiny little socks that seemed to go into the washer as a pair and come out a single. It wasn’t until my boys were in high school that I smartened up and bought about 50 pairs of the same socks, so a mate was always assured, though mating by stain color became the norm.

Not long after each son’s arrival, the predictable blues and primary colors of a baby boy filled the folding table. Lots of tiny little socks that seemed to go into the washer as a pair and come out a single. It wasn’t until my boys were in high school that I smartened up and bought about 50 pairs of the same socks so a mate was always assured, though mating by stain color and crunchiness became the norm (if you have boys, you can probably relate to this). 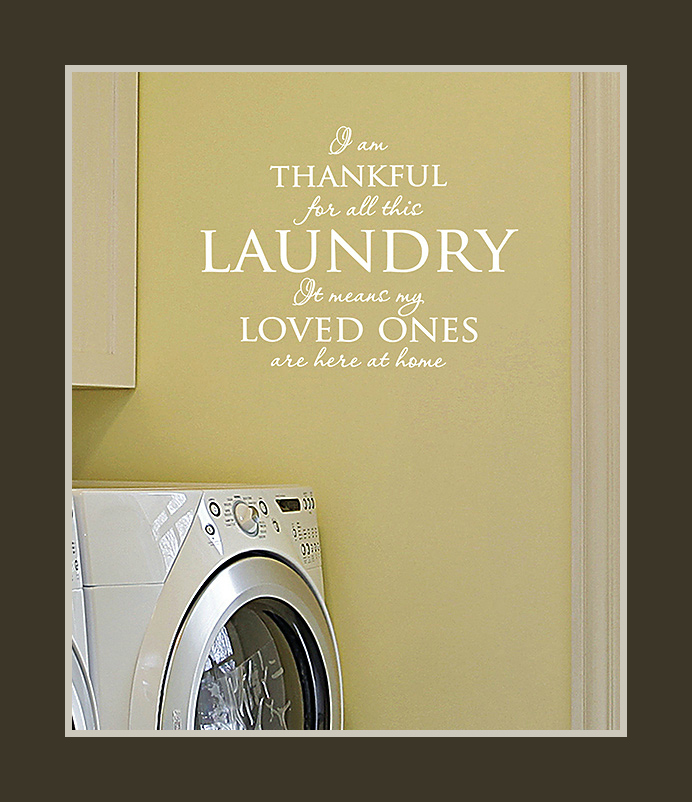 I am thankful for all the laundry. It means my loved ones are here at home – photo credit: Wallquotes.com by Belvedere Designs on Zulily

Little League and football uniforms gave way to “date” outfits, work clothes, and plenty of goofing off around the house and playing video games attire. It wasn’t long before the laundry pile became seasonal….it arrived as the youngest came home from college and when the oldest came home to do his laundry. Soon it was gone, and I missed it. A lot. I still do because it means they’re gone. Sure, they come to visit and sometimes with laundry, and now there’s the laundry of my adorable little granddaughter, and I jump at the chance to fold her little dresses and sweaters. I admit I’m tearing up writing this because now it’s just my husband and myself and while we still manage to make much more laundry than two people should, it doesn’t change. He’s wearing the same Levis 501 jeans I met him in 35 years ago (still in a 32″ waist!) and my clothes look the same as they have for the last few years – wash & wear lounge clothes – boring.

So, next time you start to complain that you’re tired of the laundry, try saying one of these little quotes to yourself. Or call me, I’ll be right over to help!

“Today I will be thankful for all the little socks, the grass stained jeans & the endless piles of laundry. For there will come a day when the laundry basket is empty and these days will be profoundly missed.” – photo credit: Wallquotes.com by Belvedere Designs on Zulily 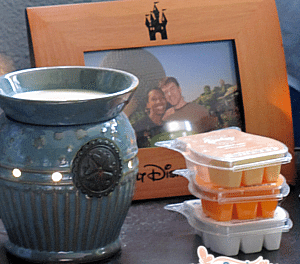 Top 5 Ways to Help Reduce Anxiety in Your Children/Grandchildren

RSV: Protecting Your Infant from this Common Disease