If you have children, grandkids, nieces, nephews or just kids that you have taken care of in the past – you certainly know how important it is to make sure they are safe and secure when you take off down the road.

Whether it is an infant, a toddler, or a tween – kids need to be buckled up properly. You never know what might happen in an instant; you want them safe. Do you ever cheer for your child at a sporting event or performance? Don’t you wish you could get the same acknowledgment for your parenting wins like finding the right car seat for your child?

In the US alone, a child under 13 is involved in a car crash every 33 seconds. That is astonishing if you stop and think about it. We all know that car seats can effectively reduce the risk of fatality or injury in young children, but over half of car seats used for safety are not safe, because they are installed or used incorrectly.

The same can be said for our older children. A full 50% of children age 8-14 who were killed in car crashes from 2011-2015 were not restrained. Buckling up is critical and wearing your seat belt the right way is just as important as installing a car seat correctly.

Despite their best intentions, some parents, grandparents, and caregivers do not even realize that their child is not in the right seat. Many parents, grandparents, or caregivers switch their kids to a new seat or to a seat belt too soon. So, they unknowingly have their child in the wrong restraint type (car seat, booster seat, seat belt). To make certain you have the right seat for your child, visit SaferCar.gov/TheRightSeat.

Tweens are children ages 8 to 14

According to data from the U.S. Department of Transportation’s National Highway Traffic Safety Administration (NHTSA), it’s estimated that 69,000 tweens are injured each year in car crashes, and sadly, 61% of 14-year-old children who were killed in 2015 car crashes were unrestrained at the time of the collision. 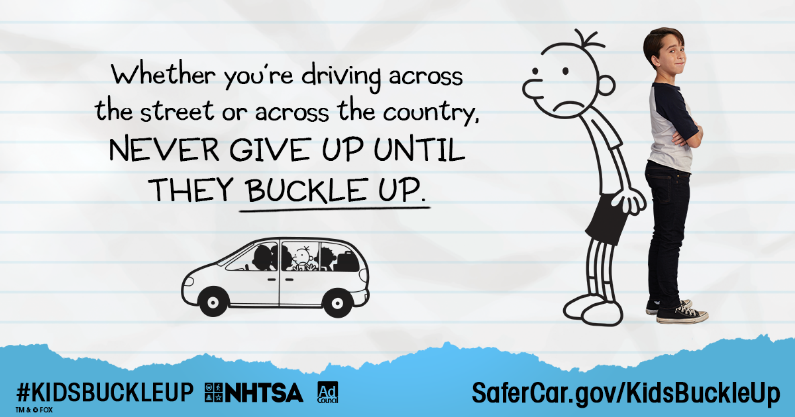 For tweens, the best thing we can do as parents, grandparents, and caregivers is to be proactive and lead by example. Start early – teach them that the car does not move until the seat belt clicks. They will grow up knowing it is simply expected that when someone gets in your vehicle, the seat belt gets buckled. Period.

Even though life as a parent is loaded with compromises, seat belt safety should never be up for negotiation. For more info or if you need additional tips to convince your tween always to buckle up, visit SaferCar.gov/KidsBuckleUp.  Also, if you have a great tip, join the conversion on social media to help other parents by using the hashtag #KidsBuckleUp.

Cooking with Curious Chef: Real Kitchen Tools and Cookbook for Kids that Grandma Loves Too!

Buy Dr Seuss Books and Plush for $5 & Kohl’s Will Donate to Kids in Need!