This post brought to you by Spray Nine. The content and opinions expressed below are that of Baby to Boomer Lifestyle. #SprayNineTough #SprayNineChallenge

Last week my husband shared what Spray Nine can do for greasy car parts. This week it’s my turn to tell you what can do for grimy household grime and germs! Like a lot of older homes, ours doesn’t have venting fans in the bathrooms, so it’s a constant battle between me and the gunk that grows when warm water meets unvented bathroom – yes, that black, grungy mold that seems to grow overnight. I clean our shower at least once a week, and during the summer that’s fine. The bathroom window is open to let the breeze in, and therefore it’s also letting out the steam and drying the wetness.

But as soon as the colder weather arrives, it’s impossible to open the window without freezing during, and after your shower and without a fan, it takes no time at all for mold to take up residence in the cracks and crevices of the 45+-year-old shower door. The metal has been scraped and scrubbed so many times that it has plenty of scratches and grooves for the mold to take hold and grow.

I’ve used just about every cleaner on the market, and the abrasive ones have taken their toll on the metal frame of my shower door. It looks almost like galvanized metal now – that dull, lifeless, and scratched up appearance of an old pail. I know it’ll never be it’s shiny former self, but I’d just like a cleanser that doesn’t have bleach in it and one that does no further damage to the door. I’d also like one that cleans the glass at the same time.

With those priorities in mind, I tried the Spray Nine Challenge! I liberally applied it to the glass door and metal frame, just 7-days after the last cleaning with bleach, and as you can see, it was disgusting. But since I’d seen what Spray Nine can do on greasy car parts, I was pretty sure it’d tackle my indoor problems as well. This heavy-duty cleaner is said to take on the toughest of grime in addition to disinfecting and killing the bacteria that’s feeding the mold was my top priority. If it got some of the 45+ years of stains off as well, then that was a plus.

I appreciate that Spray Nine doesn’t use bleach or other corrosive chemicals because that’s better for us and the environment. I’m a reluctant bleach user and only use it as a last resort. I did notice Spray Nine has a strong scent, so I opened the tiny bathroom window to provide proper ventilation. Lucky for me, it was the one sunny day this week amongst nothing but rain for days.

Spray Nine’s “Triple Threat” formula worked well in cleaning away the mold, mildew, and soap scum in the shower. Sadly it did nothing to hide the 1970’s linoleum floor and bad navy blue paint job on the cabinet. But then only a major gut job and renovation will do that!

It’s never fun to show off your most embarrassing mess, but while the outdated and unintentionally shabby chic decor doesn’t add to the overall ambiance of the bathroom, the sparkling new shower door does! But you’ll have to take my word for it. Trying to take a photo showing the “after” is nearly impossible in our terribly lit bathroom. Every crevice, though now clean, has a shadow which makes it appear dirty. But Spray Nine and my trusty old toothbrush took care of it.

We’re five days out from cleaning, and so far the mold seems to be progressing slower than usual. It’s hard to say for sure if it’s all due to Spray Nine, or if the bathroom window has been open more than usual.

Here are two takeaways for you – never buy an old house unless you have plenty of money, time, and the skills necessary for repairing nearly everything in the house at least once or twice in the time you live there; and two, have a great cleaner you can count on to help you keep the creeping crud from taking over. Oh, and I nearly forgot – put better lighting in the bathroom so you can see your clean results!

While I used Spray Nine inside my home, don’t forget it’s also perfect for just about anything in the yard, car or garage too!

Take the Spray Nine Challenge.  What germy, grimy, gross thing will you clean?

See what Spray Nine Heavy Duty can do for you. 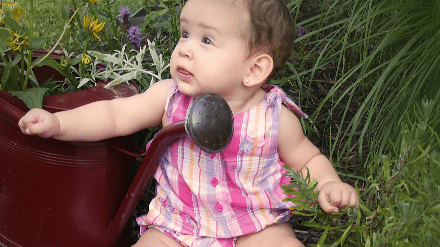 I Wish I Knew What Was Eating My Broccoli So I Could KILL It!

Have a Clog-Free Holiday with Charmin #IC #TweetFromTheSeat #sponsored

Update Your Landscaping in Five Minutes by Adding Light!

First Alert 10-Year Alarm: Give the Gift of Peace of Mind

Venta Airwasher Review: Purifier and Humidifier in One!

TruGreen: Is Your Yard Ready for Summer?