This post brought to you by Spray Nine. The content and opinions expressed below are that of Baby to Boomer Lifestyle.

I drive a 1982 Datsun 4×4 King Cab Pickup.  Who knew that when I drove my new truck off of the car lot that day in 1981, that I’d still be driving it 34 years later, I sure didn’t. It was the truck of my 23-year old dreams, I was single and spent a lot of time hunting, fishing, and camping. It was my gift to myself when I was hired as a firefighter. I never dreamt I’d take the first road trip with my girlfriend in it (she’s now my wife), and soon after stuff two boys in car seats in those jump seats, or still be driving it well into my 50’s.  I sure didn’t.

After ten years of owning my truck, it became a bit of a joke at the Fire Department. Many of the guys had gone through two to three cars in the same time frame. When I neared the 20 year anniversary, I think I kept it mostly out of spite because I was always being pressured to upgrade to a new car with cool tech features, especially by my wife. Sometime between years 20 and 25,  I decided that my truck and I had started my career together, so we’d finish it together. Therefore, my current plan is to keep it running until my retirement.

1982 Datsun King Cab 4×4 Ad – Luxury? Not really, but at the time, it was considered to be. “Roomiest compact goin’; the exclusive King Cab lets you recline its bucket seats for royal comfort.”   Source:

But I’ll confess, that a good chunk of the reason I still own my Datsun pickup is that it’s a dinosaur like me.  I’ve torn it apart and fixed it several times and I can because it requires wrenches to repair it and not a computer to diagnose it. It has no fancy tech features to go haywire, but of course, that means it has no luxury options either.

The parts for my truck haven’t been available off the shelf for decades, and it’s become a bit of a treasure hunt to find parts as they wear out. I often have to harvest what I need from wrecked vehicles at a junkyard.

That’s exactly what I did last weekend when I replaced the aging water pump. I think this may be the third time I’ve done it over the years, and I’m not entirely sure that it was defective. But it’s been some time since the last fix, and it could explain the problem I had, so it was worth my time to replace. That said, I wasn’t willing to dispose of the old pump, at least not until I know for sure it’s defective, so I cleaned it and added it to my shelf odd of parts which I’ve archived in the event I need them.

Before I put any part away, I make sure it’s clean so that it doesn’t deteriorate and so that it’s ready to go when I need it. With a vehicle of this age, grease and grime are a given, and I’ve tried many cleaners over the years and have had success with some, but most are very caustic and my wife is always on me to find less noxious cleaners. To appease her, I decided to take the Spray Nine Challenge to see if less caustic cleaner can do the job.

I always wear gloves and eye protection when cleaning parts.

Spray Nine claims that their heavy-duty cleaner and degreaser can tackle the toughest of grease and grime in addition to disinfecting. While killing bacteria wasn’t my goal, degreasing certainly was.

I read the directions and a little bit about the degreaser before I started and found out that it’s been used by auto techs and DIY’ers for more than 60 years. It’s pretty obvious that I appreciate things that have a history behind them. I also pointed out to my wife that Spray Nine doesn’t use bleach or other corrosive chemicals which made her happy.

Before Spray Nine – it was apparent this had been in my truck for some time.

Before Using Spray Nine – Build up is evident in many places.

I’ll admit it; I never expect a less-caustic product to work as well as a more abrasive product and many times I’ve been proven wrong just as I was today. It does have a strong scent, and it needs to be used in a well-ventilated area like most cleaning chemicals so take a moment to prepare your work area.

I sprayed the part and let it sit for a few minutes. Then I took a rag and wiped away the spray.

The Spray Nine did a good job in the area where I wiped, (bottom right) but it was apparent that I was going to need a second pass, so I stopped wiping.

I sprayed the part again with Spray Nine, and this let it sit for a few minutes.

Spray Nine’s “Triple Threat” formula worked well on the water pump and with only a light scrubbing with an old toothbrush to get into the cracks and crevices; the part was clean in minutes. It would have been much faster if I had trusted its cleaning power instead of stopping to check it every 30 seconds or so.

This time I used an old toothbrush to get into all of the cracks and crevices. It wasn’t necessary to scrub hard at all.

I only cleaned the right half so you can see the difference. At this point, I became a believer in Spray Nine’s ability to clean.

Now I was ready to clean the whole pump.

Total cleaning time was under 15 minutes even allowing it to soak in. You can see in the pan how much grime came off with my gentle brushing.

Even better, the oil pan I was using was cleaned in the process and required just a quick wipe to clean. I don’t think I’ve ever put it away looking this good.

Even the oil pan came clean with just a wipe making cleanup so easy.

This is the final result of my Spray Nine Challenge. It’s clean and ready to go back to work sometime in the future. My wife thinks it looks like a piece of art. I could have gotten it cleaner had I sprayed it one last time, but considering how poorly my old degreasers work, this looks like a brand new part.

While I used Spray Nine on my greasy, grimy water pump, it’ll also clean engines, tires and wheels, bug splatter, dashboards, door panels, consoles,  upholstery, vinyl tops, trunks, trailers, RV’s, campers and so much more.  Just about any mess, whether you find in the garage or outside. My wife has stolen the bottle to try it out on her worst cleaning nightmare, our 40-year old shower. She’ll share her Spray Nine Challenge with you soon.

Take the Spray Nine Challenge.  What greasy, grimy or germy thing will you clean?

See what Spray Nine Heavy Duty can do for you. 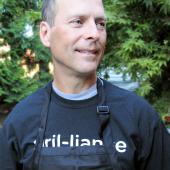