Queen of Katwe preview was provided by the Disney Company; all opinions are my own.

I got a chance to view Disney’s newest film, Queen of Katwe, a few months ago when I was in Los Angeles for The BFG red carpet premier. I’ve been dying to tell you about the movie since the day I saw it – it’s wonderful and one that’s stuck with me long after I left the theater.

The film is based on the true story of Phiona Mutesi, a 10-year old child living on the streets of Kampala, Uganda. She sells vegetables to support her family so going to school is not an option, but Phiona’s life takes a dramatic turn when she is introduced to the game of chess.

The film is about more than chess. It’s a coming-of-age story that demonstrates the importance of the power of dreams no matter what your age. It also reminds us that there are gifted and talented people around the world.

Take your family to see this heart-warming and family-friendly film when it opens in theaters September 23rd.

John Carls (Rango, Where the Wild Things Are) stumbled across an article about the work of Sports Outreach published in ESPN Magazine by Tim Crothers. He realized the potential the story had to reach audiences. Disney came on board, and the search for a director began. This person would need to be passionate about the material and have a strong visual aesthetic. Disney found these qualities in Mira Nair, who by chance happened to live just minutes away from Phiona’s home in Kampala. 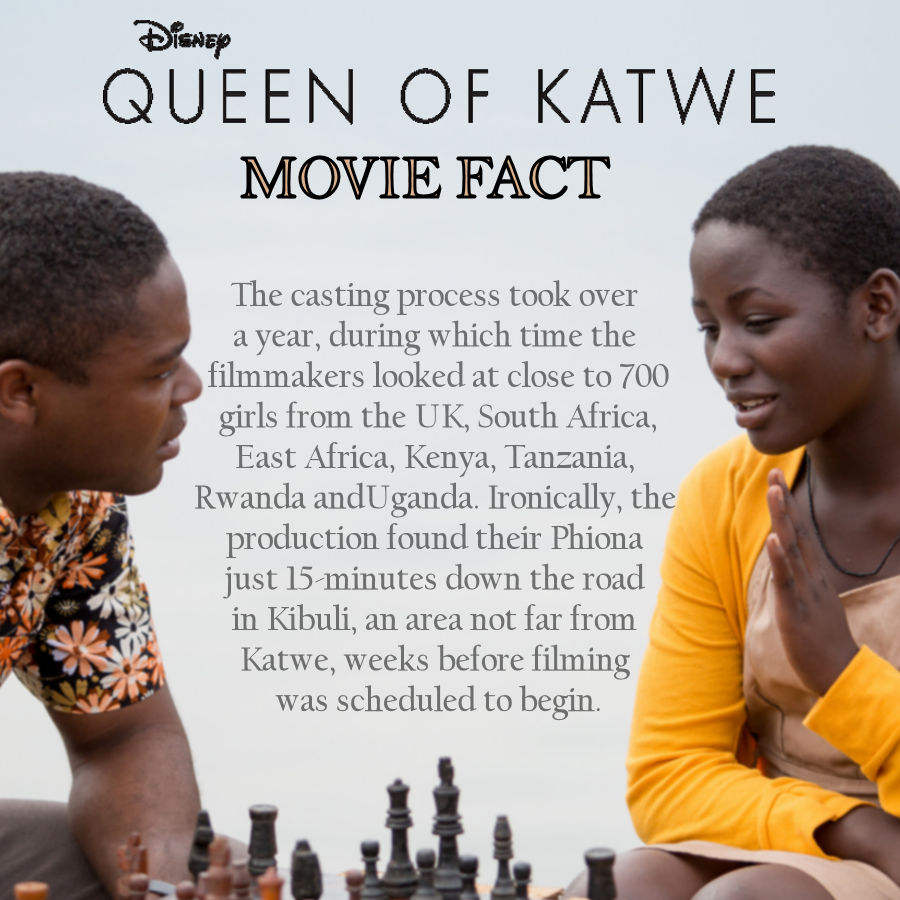 The director had only one actor in mind for the lead male – David Oyelowo (Selma, The Butler: A Witness to History). The role of Phiona’s mother went the director’s longtime friend, Lupita Nyong’o (The Jungle Book, 12 Years a Slave, Star Wars: The Force Awakens). But it was the role of Phiona herself that stumped them and after searching for over a year, the film’s casting director happened upon a dance rehearsal where she spotted Madina Nalwanga. She was so enthralled with her that she asked her to audition for the role on the spot where she filmed it with her smartphone. She knew Madina would have the confidence to take on the role. 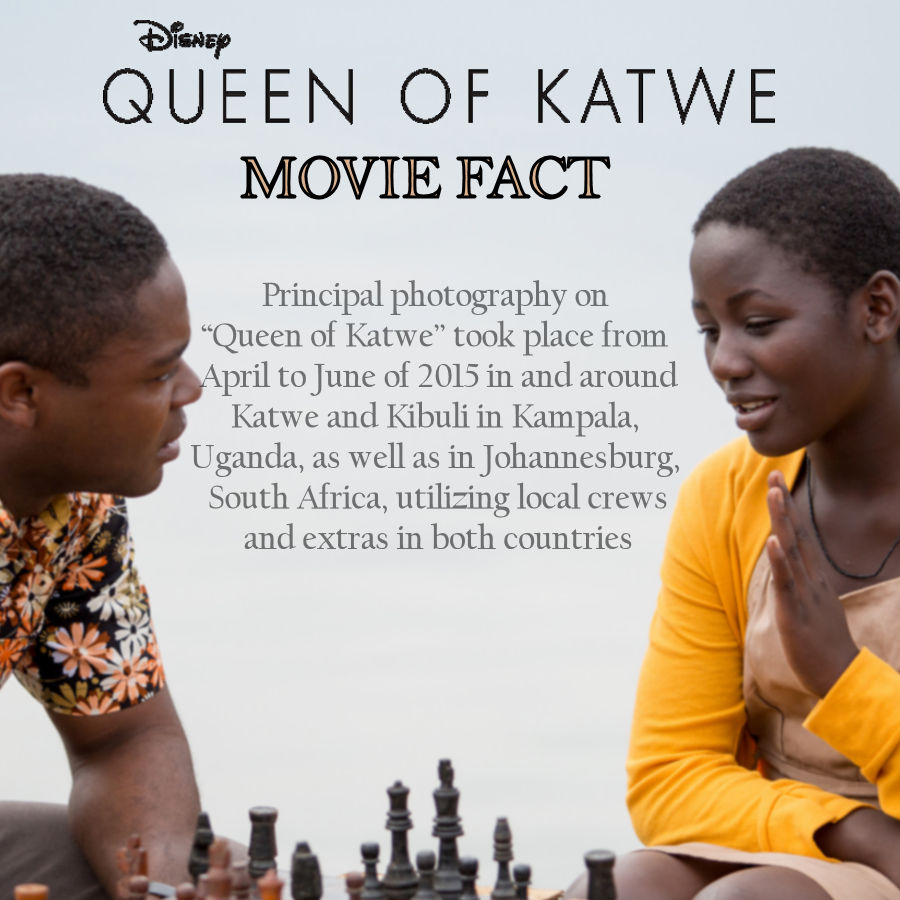 Kampala, Uganda, is one of the fastest growing cities in Africa. Its population is just under two million people.  Though Katwe is one of the most densely populated areas of the city, it’s a vibrant place with rich colors of reds, yellows, and blues in the buildings and natural surroundings which mix with the colorful and eclectic clothing of the people who live there to create a beautiful moving mosaic of color.

There are over thirty songs featured in the film. The music was inspired by the streets of Katwe and is a cutting edge Afrobeat sound that takes you right into Kampala’s modern sound. There are haunting melodies, Nigerian afrobeat, classic Ugandan big band tracks, and traditional Ugandan instruments which have been married into an orchestral sound to enhance the onscreen story. ( Purchase the Queen Of Katwe soundtrack here)

Phiona Mutse graduated from a vocational secondary school in 2016. She plans to apply to college with the dream of becoming a doctor or lawyer. Her mentor, Robert Katende married and had three children. He still houses chess students, and he also serves as the Director of Sports Outreach where he is still running over 300 programs throughout Uganda.