This is the story of the second leg of our Panamanian trip which included Bocas Del Toro, Isla Carenero, and Starfish Beach – you can read about our Boquete leg of our journey in our Boquete Activities, Lodging and Food post

The bus from Boquete to Bocas Del Toro total duration is about four hours, and if you’re prone to motion sickness make sure you take some Dramamine, as the mountainous roads are very windy. The bus was about $30 per person, making this a very affordable way to move around the country. The ticket also included the water taxi ride from the town of Almirante (bus drop off), to the actual town of Bocas on Isla Colon.

Bocas Del Toro is an island province consisting of several major islands situated in the Caribbean sea. The central residential area of the islands is Bocas town, which rests on the Southeast archipelago of Isla Colon. The region is home to large banana plantations belonging to Chiquita, who produces 3/4 of a million tons of bananas in the area every year.

In the last several years Bocas has become a major tourist stop, especially for those looking to kick back. Bocas was one of the few places in Panama we saw that had a lively nightlife, catering to all the college-age tourists in town. We were able to hear distant bass drum beats late into the night, so if you’re looking for a party in Panama, Bocas would be a good bet.

We found a hotel situated across the bay from Bocas, on the Isla Carenero. Water taxis are plentiful between Bocas town and the surrounding islands and cost about $1. We booked a cheap stay at the well-regarded beach-side resort, Careening Cay. We had hoped for an over-water room but ended up getting moved into an enormous standalone bungalow, which was very nice, especially considering the price.

Attached to the resort is the Cosmic Crab restaurant, which served tons of fresh seafood, including huge lobsters sold directly from the fishermen from their boats. The restaurant was located over the water, and had an opening in the middle of the floor that could be used for swimming during the day, and was lit at night, producing an ethereal glow in the water. After eating, we called it a night and retired to our air conditioning. 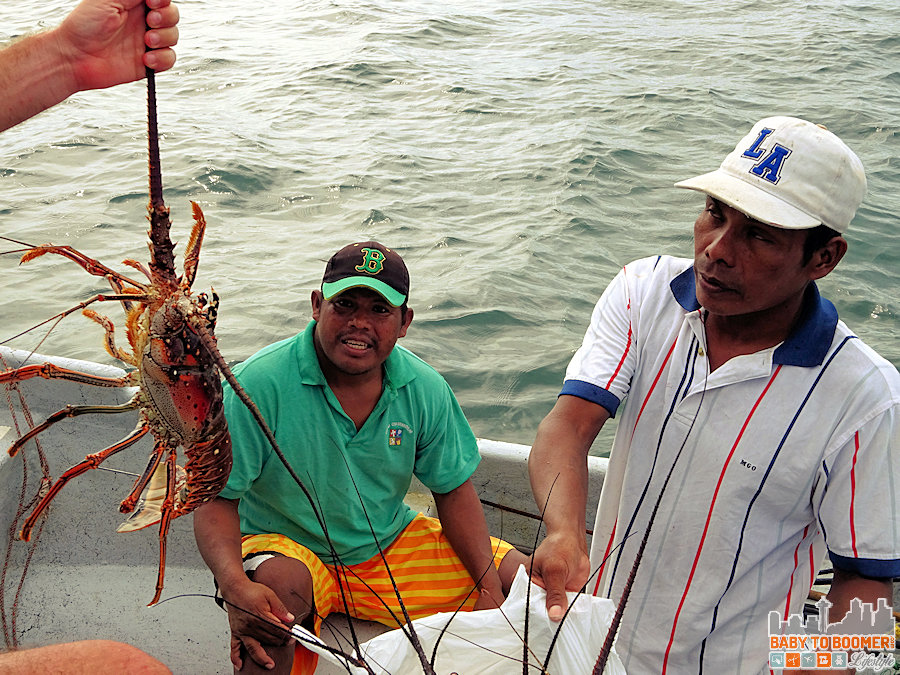 We were up bright and early the next morning to explore the main island of Colon and Bocas Ttown. We decided to rent bikes to make traveling a little easier. We read about a small cave not too far out of town called La Gruta cave. The ride to the cave started easily enough on flat ground, but as we started to climb the hills along the way I discovered I was way too out of shape for this endeavor!

We did eventually make it to La Gruta Cave after several breaks. The cave is relatively small with a creek running into the mouth, and a shrine to the Virgin Mary looks over the scene. Within the cave is a sizable colony of bats as well as a myriad of insects and spiders. We didn’t go far into the cave but did manage to see a lot of bats hanging from the ceiling.  While a self-tour is just $2, there are also cave tours by boat with rates starting at $45 per person.

Our ultimate destination had been Playa Boca Del Drago, but I felt like I would drop dead at any moment because of the one-speed rental bikes and the steep hills, and we were only about a third of the way to the Playa, so we decided to head back to town.

Back in town, we caught a small bus from Bocas Town to Playa Del Drago, which was inexpensive and took about 90 minutes. Upon arriving in Drago, we walked to Playa Estrella (aka Starfish Beach), which is known for its party atmosphere and named for the brightly colored starfish often found in its shallow waters. After about a 20 minute walked we arrived at the beach. It was packed. There were hundreds of people stretched along the sand, spread among about a dozen makeshift restaurants and bars, all busy. People were enjoying boating, swimming, volleyball, and various other activities. These all looked fun, but we were here for one thing: starfish.

After walking the beach looking into the water for starfish, we decided to go in for a dip to cool off, and there at our feet was a lone bright orange starfish! Our mission accomplished we went back to Drago to pick up our return shuttle. This very quickly became the most uncomfortable bus ride I’ve been on.

Our nine-seat van quickly swelled to become a fifteen-person van; people were sitting on the floor,  the driver’s console, and a makeshift bench behind the driver’s seat. I was forced to stand half bent over while trying to maintain my balance on winding roads with quick stops. It was uncomfortable at the time, but hilarious looking back.

Finally arriving back in Bocas Town we all jumped out of the van, happy for some fresh air.

Our next leg of the trip takes us from Bocas Town to Isla Canas.

Photo of the Day: Mt Baker from the Washington State Ferry Hyak