One of my favorite books has been made into a movie starring Robert Redford whom I’ve adored since the 70s. Somehow the fact that this was happening had gotten by me unnoticed until today! I happened to look up the title for another piece I’m writing about crafting while listening to audiobooks, when there it was an advertisement for “A Walk in the Woods” by Bill Bryson opening Labor Day weekend!

The comedy adventure follows Bill Bryson (Robert Redford), who’s decided that instead of retiring to the good life with his loving wife played by Emma Thompson, he needs a challenge. He decides to hike the Appalachian Trail with the only person he can find that can go along, his former friend Katz (Nick Nolte). Katz is available because the serial philanderer is down on his luck and using the trip to sneak out on paying some debts. The problem is, they’re about to set off on a challenge that neither one is prepared for physically and mentally and that’s when it really gets interesting.

A Walk in the Woods – Official Trailer (2015) – Broad Green Pictures

The Joy of Travelogues & Travel Essays

“A Walk in the Woods” was the book that got me hooked on non-fiction, first-person storytelling. It’s among my favorite reads and possibly the only book I’ve listened to more than once. It started me on a path of discovering the joy of reading travelogues and travel essays and since then I’ve read or listened to several of Bryson’s other titles including “I’m a Stranger Here Myself,” “In a Sunburned Country,” “The Life and Times of the Thunderbolt Kid,” and “A Really Short History of Nearly Everything.” From there I moved on to “If You Lived Here, I’d Know Your Name: News from Small-Town Alaska,” “Into Thin Air: A Personal Account of the Mt. Everest Disaster,” “Into the Wild,” “Travels with Charley in Search of America,” “On the Road,” to my most recent listen, “Wild: From Lost to Found on the Pacific Crest Trail.” There have been many others with titles long forgotten, but the stories have remained a part of me. After nearly two decades, travelogues are still my first choice though now the titles I can read are limited to those with an audiobook version.

Bill Bryson A Walk in the Woods Quotes

Bill Bryson isn’t for everyone. He has a foul mouth and a wit that can come off as caustic. I’ve spared you his foulest quotes and picked out a few about the trail.

So now you can understand my excitement at discovering this film. The killer cast includes Robert Redford, Nick Nolte, Emma Thompson, Kristen Schaal, Nick Offerman, and Mary Steenburgen. Though they’ve already taken some creative license with the characters to fit Redford into the roll (he’s decades older than Bill Bryson was when he took this trek), I’m hoping they don’t stray too far from the original and won’t have added any of the typical Hollywood over-the-top dramatization swill they usually do. So many original stories are ruined when Hollywood producers and directors get their hands on them. They feel the need to “punch it up” as if all audiences require fart jokes and unrealistic situations to get through a 90-minute movie. Here’s hoping with Redford attached it will retain some of it’s original authentic crassness – vulgarity with just a hint of class.

Have you discovered the joy of reading travelogues or read “A Walk in the Woods?” I’d love to hear your suggestions for additional books to check out. 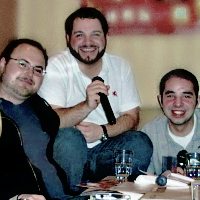