I attended the premiere of Disney • Pixar INSIDE OUT to facilitate this review; all opinions are my own.

It’s a habit. I can’t watch a Disney • Pixar film without looking for the hidden messages (also called Easter Eggs). You know, those fun bits that refer to previous movies, characters, etc. So of course, while I sat mesmerized by the color and sound of INSIDE OUT as it played before me on the screen at the historic El Captain Theater in Hollywood, I almost got so caught up in the film that I forgot to look for them (read: INSIDE OUT Movie Premiere: My Candid Celebrity Snapshots).

Thankfully, there are a few very obvious Easter Eggs early on in the film that jolted me back into search mode. Plus Pixar helped with some behind-the-scenes information on how the characters and the world within Riley’s head were developed, so I’ve come up with a list of 20 INSIDE OUT Fun Facts and Easter Eggs.

20 INSIDE OUT Fun Facts and Easter Eggs

INSIDE OUT Fun Facts & Easter Eggs: The Story

Director and writer, Pete Docter’s tween daughter Ellie, was the force behind the story. She voiced young Ellie in Pixar’s UP film and during that time she was very much like her UP character. Several years later he noticed she’d changed and become moodier and less of the bubbly little girl he knew; and that got him thinking about what was going on in her mind.

Headquarters is meant to be warm and welcoming. That’s why there’s carpet on the floor and not a lot of sharp angles. The control panel was designed to be simple so that it is obvious that Riley was still in control of her behavior  (though you’ll notice when they mention her becoming a teen the panel changes). Interestingly, the shapes that make up Headquarters are based on the hypothalamus that serves as the cognitive center of the mind. Filmmakers wanted to be sure we understood that the story takes place within the mind and not the brain.

And in case you were wondering, the five personality islands are located an average of 7.3 miles away from Headquarters. No really, Pixar figured it out because they wanted to be sure they looked proportionally correct in the film. 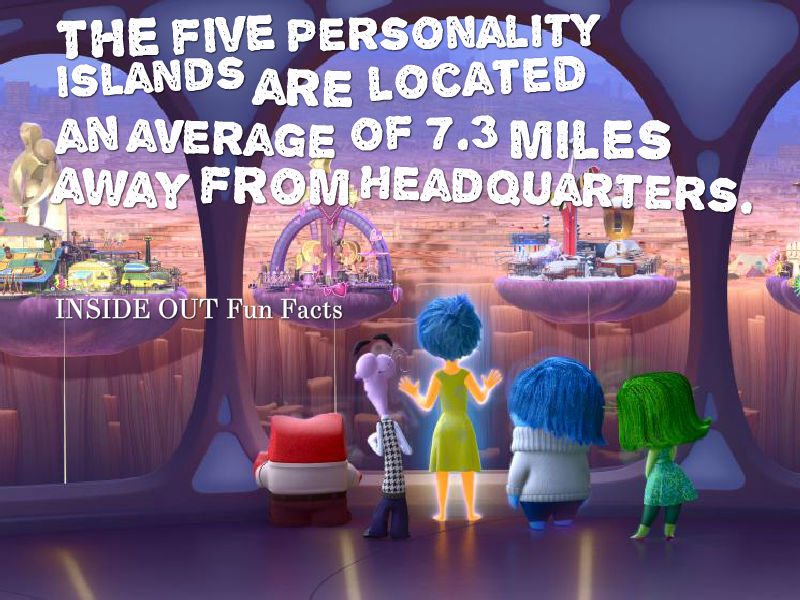 Filmmakers wanted an authentic look to the Long-Term Storage area so they suited up and visited the Jelly Belly Candy Factory. The colored jelly beans rushing through the tubes inspired them to create a similar system for moving the memory balls. Is it any wonder that the Forgetters are jelly bean shaped?They also visited an egg processing plant to get down the movements of how to move fragile objects without breakage.

Did you wonder why there were five emotions when it seems like human’s have so many more? Well, it’s simple, it would have been too crowded in Headquarters so they tossed out all but five – Joy, Sadness, Fear, Disgust, and Anger. (Read: INSIDE OUT Movie: The Science Behind the Story in Theatres Now for more information about the filmmaker’s choices in emotions.

The characters were drawn with purpose. They kept working on the shapes and colors until they felt right, they aren’t meant to mimic any real memory cells

If you thought Sadness looked like an upside-down-teardrop, you’re right! She was drawn that way and her hue is blue to sell her story. The animators also slowed down the pace when Sadness came on screen and they worked with the voice artist to make sure they had the right feel to her.

Fear has but one long hair on his head and it does have it’s own faint glow if you look carefully. It’s said to be like a dog’s tail – it lets everyone know in an instant how he’s feeling.

The Imaginary Friend that steals the show was created by referencing three heavyweight comedians, and I don’t just mean in girth. Jackie Gleason, John Candy, and Oliver Hardy helped form the shape, feel, and movements that would become the character loved by Riley as a child and embraced by movie goers.

We knew he was made of cotton candy, but did you know Bing Bong has a nougat-y center? Though we don’t see it, the filmmakers assure us it’s there. In fact, they created Bing Bong to be everything we loved as children including a cat, elephant, and even dolphin, sort of.

Disgust’s disgust for broccoli goes deep so it’s no wonder her shape was drawn as a nod to the vegetable. She’s got a good heart and it’s her job to keep Riley from making a fashion or food mistake.

INSIDE OUT Fun Facts & Easter Eggs: A Nod to Other Films

Of course there’s a little bit of TOY STORY hidden inside INSIDE OUT. The globe found in Riley’s classroom is the same world globe that’s been seen in all of the TOY STORY films.

Though several have said that the camo outfit was a nod to Disney’s DINOSAUR, Pixar says it’s a homage to TOY STORY.

The CARS franchise is also represented in the film. Several of the background cars in the arrival in San Francisco scene have CARS bumper stickers.

If you look closely during the film, you’ll see the Married Life scenes from UP inside the background memories on the shelves inside and outside of Headquarters.

You’ll also see a tribute to Ralph Eggleston’s 2000 short film, “For the Bird,” on the family’s trip to San Francisco.

San Francisco almost becomes a character in the film. Once they arrive the scenes go from light and bright to dark and dreary. Sure, San Francisco can be a bit foggy, but the used it to set the mood for Riley’s change. (Below: A parking meter on the street in San Francisco sports a sign that reads, “Quarters and Dollar Coins or Barter During Burning Man.” )

The family made the move to San Francisco for dad’s job. The name of the company, Brang, was a nonsense wordy Pixar made up but one that sounded like it would fit right in as a tech start up in San Francisco.

And what about that mustache? Originally it was to be a goatee, but they wanted a fish-out-of-water look for dad so that he too would not quite fit in. With his busy mustache he doesn’t quite fit into the stylish San Fransico area.

There are plenty of other hidden gems (Easter Eggs) within INSIDE OUT, but these are the ones I could confirm. How many did you catch?