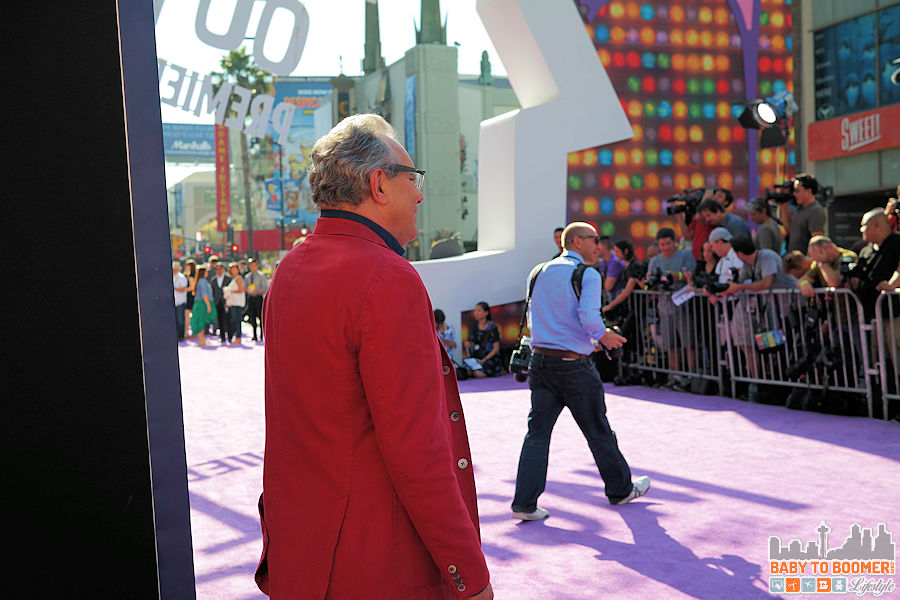 Transportation and accommodations were provided to facilitate this INSIDE OUT movie premiere coverage; however, all opinions are those of Baby to Boomer Lifestyle.

Entering the red carpet area of the Disney | Pixar INSIDE OUT Movie Premiere – Hollywood, CA

You’d think that it’d be easier to spot the celebrities. After all, there were only a few hundred people attending the Hollywood premiere of Disney | Pixar’s newest animated movie, INSIDE OUT, but it’s harder than you think. First the red carpet – though in INSIDE OUT’s case, the purple carpet – is divided into two “lanes.” One is for invited celebrities who pose for the press alongside their press handler who’s job it to hold a piece of paper with the celebrity’s name handwritten on it and to keep the celeb in the right place for the perfect amount of time. They move them quickly as soon as the press turns their camera to the next person on the carpet because there’s nothing more awkward than seeing someone standing there when the press isn’t interested. They’re the same person who grant access to, or keep you from approaching the celeb they’re with.

The second “lane” is for the rest of us. The guests that aren’t recognizable. In fact, I’ve been told several times to “get out of the background” by the gang of photographers hoping to take a clean shot of their celebrity prey. But I have to wonder why all the competition? The way press lines are set up, they’re all going to get the same shot more or less, and that’s the fun of being an invited guest. Camera in hand, I got to walk into the party and take discrete photos of celebrities when they’re not posing, and they’re just being real. To me, that’s priceless. But that also means that I don’t have the luxury of having a visual clue as to who’s who. So many times I realized who someone was after they’d walked by and off into the crowd.

Comedian Lewis Black (voices Anger) poses for the press at the Disney | Pixar INSIDE OUT Movie Premiere – Hollywood, CA

That included Minnie Driver who was wearing a fall green outfit that seemed out of place on such a hot day and Rob Riggle whose face I knew II’d seen before, but I didn’t have a clue why. I also missed quite a few opportunities because I headed back to take photos of the activities and food and then went back to the carpet. I likely crossed many who were enjoying the kid’s area while I was celebrity watching. I won’t make that mistake next time, but I do have some fun photos of the pre-party including some adorable INSIDE OUT cupcakes that were so delicious that I’ll share soon.

There were several celebrities that I had hoped to see but never did. Like Jon Heder, Cheryl Hines, Busy Phillips, Bobby Moynihan, Rainn Wilson, Molly Sims, Pink, Tory Spelling and Dean McDermott, and Fred Savage.

So who did I see? Mindy Kaling arrived just minutes before we were shooed off the carpet and into the theater.  Such a disappointment, I was so close, just a few feet separating us, and she looked stunning. Ironically I thought I hadn’t seen Amy Poehler during the event, but while I was editing photos I found this one of her talking with Kaling – I didn’t recognize her with her new darker hair color.

John Ratzenberger looked very smart with his a trimmed white goatee, sunglasses, and a Nero-style jacket. He had a lovely young woman on his arm and a huge smile on his face.

Actor John Ratzenberger (the voice of Fritz) at the Disney | Pixar INSIDE OUT Movie Premiere – Hollywood, CA

Phyllis Smith (the voice of Sadness and best known for her role on “The Office”) wore her character’s signature color, blue, that matched her stunning eyes. She was friendly and stopped to chat with fans and spent time talking with several teenagers who appeared to be enjoying their time with her.

Phyllis Smith (the voice of Sadness) at the Disney | Pixar INSIDE OUT Movie Premiere – Hollywood, CA

Tony Hawk also made several of his fan’s happy by taking photos with them as did Johnny Knoxville, though after a few snaps he said he had to move on, and he did quickly.

Tony Hawk making a fan’s day at the Disney | Pixar INSIDE OUT Movie Premiere – Hollywood, CA

Actor/Comedian Johnny Knoxville at the Disney | Pixar INSIDE OUT Movie Premiere – Hollywood, CA

Actor Johnny Knoxville stops to take photos with fans at the Disney | Pixar INSIDE OUT Movie Premiere – Hollywood, CA

David Alan Grier stopped by the bar to say hello to comedian Kym Whitley. I snapped this photos moments before he walked up behind her..

Garcelle Beauvais also stopped by for a cold drink. Because of the intense heat, ice water was plentiful at the event.

Actor Garcelle Beauvais at the Disney | Pixar INSIDE OUT Movie Premiere – Hollywood, CA

Bill Hader from Saturday Night Live did the quick walk on by without stopping to acknowledge his fans. His hair appeared to be taking advantage of the hot day to curl even more than usual.

Actor Bill Hader (the voice of Fear) at the Disney | Pixar INSIDE OUT Movie Premiere – Hollywood, CA

I heard that Mario Lopez was there with his daughter and having a great time in the children’s area creating art and playing games. Kyle MacLachlan smiled as he walked by, but he too was quickly gone. It turns out the cast and crew of the film were set to do a photo, and that’s likely the reason.

Kyle MacLaughlin (the voice of Dad) at the Disney | Pixar INSIDE OUT Movie Premiere – Hollywood, CA

Paula Poundstone was hard to miss in the insanely pink suit, black shirt, and print tie she chose for the event.

The Control Center prop was loved by all. It was a fantastic spot to stop and take a photo. Kamil McFadden (Rise of the Guardians) took his turn.

Actor Lewis Black finished his red carpet interviews and photos and headed into the pre-party.

Actor Rashida Jones (Parks and Rec) was the one celebrity that stood out for her friendliness. She made herself available to fans of every age. She graciously took photos, laughed and appeared to enjoy interacting with her fans. She was impeccably dressed with the exception of her shoes which looked like they belonged on a Clydesdale and not a beautiful woman.

The oddest entrance goes to Actor David Koechner. From a distance it was hard to tell what he’d done to his sideburns and mustache, but as he got closer, it was obvious he’d stopped at the kid’s hair chalking booth on the way to the carpet and taken a liking to the blue chalk.Definitely an interesting look.

Actor David Koechner (who stopped at the kid’s hair chalking booth on the way) at the Disney | Pixar INSIDE OUT Movie Premiere – Hollywood, CA

As we headed into the theater, I ran into John Lasseter, literally, getting popcorn at the concession stand. He was trying to decide between the plain or colored popcorn – blue for sadness, red for anger, and green for disgust. Like me, he choose the movie theater popcorn in an INSIDE OUT bucket.

With soda and popcorn in hand, I made my way to my seat in the first row. A bit close but thankfully on the left side so comfortable. But who noticed, as soon as the film started I was focussed on the movie. So much so I have no idea who was sitting near me, who came late, or who left early. That’s the great thing about a fantastic movie; nothing else seems to matter.

The film finished, the credits rolled, and we headed outside. I snapped a few photos of the marquee lit up at night and then the herding of the guests started. The area fills with the security staff who yell loudly to keep moving and clear the carpet. They blame the Fire Marshall, but I’m sure it’s because the faster they get us off the purple rug covering the street, the quicker it can be picked up and stored away for the next event, and Hollywood Blvd can go back to the car traffic.

Closing down the Disney | Pixar INSIDE OUT Movie Premiere – Hollywood, CA

Don’t missed INSIDE OUT – it’s an incredible family film and one that will spark so many fantastic conversations about emotions.

Disney | Pixar’s INSIDE OUT debuts in  theaters on June 19th

“The Muppets” Wocka Wocka Pack Up for Grabs Plus Downloadables

Which Muppet are You??? Take this Quick Quiz To Find Out