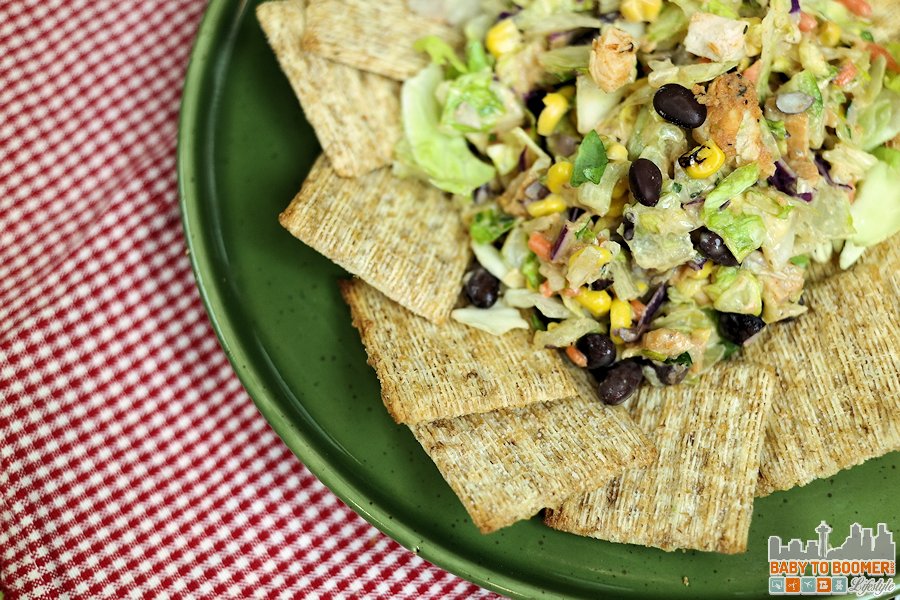 The challenge. To put only three ingredients on a Triscuit cracker. Is that even possible? It might be easier to share what doesn’t go on a Triscuit. Like, um…marshmallow fluff? Hmm….I bet there’s somebody, somewhere, that does that.

In our house, leftovers are prime targets when it comes to topping our favorite crispy cracker. But right now our refrigerator is a jar of pickles short of empty. Oh, there are a few things I could find, like peanut butter, bananas, and jelly. Yes, that’d be a tasty treat. But my husband isn’t a fan of PB&J+B so I had to think harder.

Is there anything that doesn’t taste great on a Triscuit?

Hard boiled eggs were available, and I thought of one of my favorite toppings – egg salad, bread and butter pickles, and fresh parsley. But again, that would be fantastic for me, but my husband thinks the only real pickle is a dill pickle, and we’re fresh out of them.

Then I spied something that could work for both of us! Fire roasted corn, black beans, BBQ chicken, carrots, radishes, cilantro, cabbage, lettuce, and to bring it all together, some BBQ Ranch Dressing. Doesn’t that combination of veggies and BBQ chicken sound amazing! But wait, didn’t I say my refrigerator was empty? So where’d I get all these great ingredients that are far more than the three I needed?

The salad drawer! Inside it was a prepared chopped salad – already made and ready to go! I took the salad ingredients and made a southwest veggie caviar by using my herb scissors to cut through about half of the veggie mix to make them petite little bites. I pulled out a portion for me that remained vegetarian and for my husband’s, I took the herb shears to the BBQ chicken. You can do the same with kitchen shears or a knife. The idea is just to make everything small enough that when a teaspoon is taken from it, it has a nice mix of ingredients.

I poured half of the prepared dressing onto the veggie caviar and chicken, put a lid on the bowl, and then shook it for about 10 seconds until the dressing coated the ingredients evenly. I opened the bowl to check the coverage, and I added a bit more dressing until the mixture just held together.

I placed the rest of the lettuce on a plate as a bed for the BBQ Chicken & Veggie Caviar and then surrounded it with Triscuit crackers. Total time? Less than five minutes! Cooking skills required? None! The taste? AMAZING! Serving size: 2 crackers.

You’re not limited to the salad I had on hand. A Cesar salad kit would be fantastic! As would an Asian chopped chicken salad with sesame seed dressing? YUM! The possibilities are endless.

But what if your store doesn’t sell great pre-made salad combos like these? Head to the deli! There are so many wonderful premade salads that go great on a Triscuit. Potato salad is one of my favorites! Sprinkle it with some finely shredded cheese and some parsley. And the all-time tried-and-true party favorite? Cream cheese, cocktail sauce, and mini cooked shrimp. That’s a winner every single time it’s served and has been since the 70’s when I was a teenager.

My History with Triscuit Crackers – So Much Good Snacking

Now that I think about it, I’ve been eating Triscuit crackers for a very long time. They’re my go-to for lunch topped with a slice of cheese, one of my beloved bread and butter pickles, and grainy mustard. I prefer the crunchy taste and texture of Triscuit crackers to bread any day. In fact, anything you can put on a sandwich can go on a Triscuit cracker!

What are your favorite three toppings? I’d especially love to hear if you have an odd one, like marshmallow fluff!

Triscuit believes in simple things coming together to create something more.  Whether it’s just three ingredients on a Triscuit or about life, we believe that you (and Triscuit) are “Made for More”.

Triscuit sponsored this blog post. The opinions and text are all mine.

EZ Tofu Press: A Must-Have Kitchen Tool for the Vegetarian