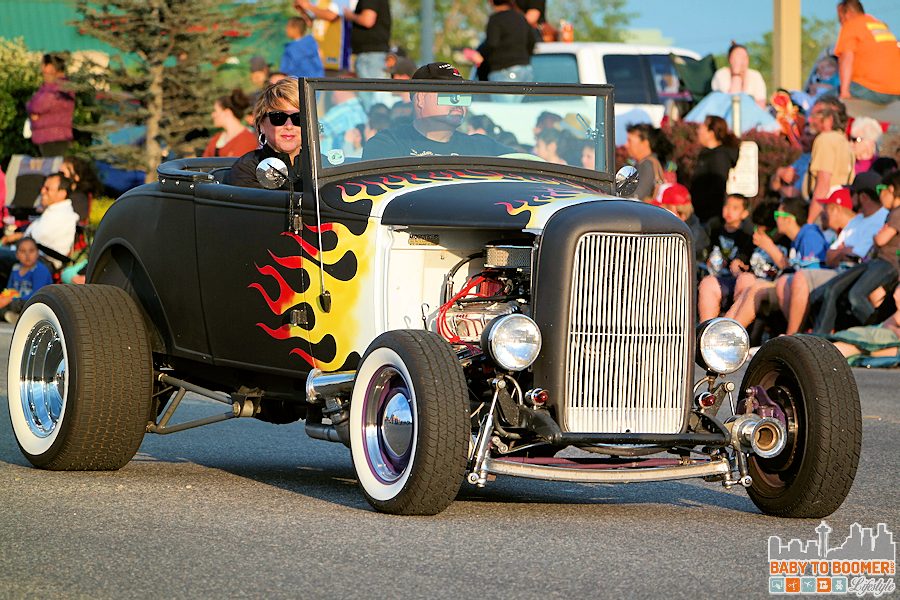 Accommodations to attend the Washington State Apple Blossom Festival were provided. The event is free to the public. All opinions are those of Baby to Boomer Lifestyle.

The Les Schwab Classy Chassis Parade & Car Show sponsored by the City of East Wenatchee took place as part of the Apple Blossom Festival in Wenatchee, Washington, on May 1st and 2nd. It’s a yearly event that brings classic and “classy” cars to the Eastmont Community Park for a weekend of activities.

Car owners paid a small fee to participate in the Friday night parade and Saturday Car Show. It’s a popular part of the Wenatchee Apple Blossom Festival with empty chairs lining the parade route hours before the actual event. But don’t let the reserved seating scare you off. This classic car parade is a favorite, but you can find a seat right up until parade time.

The parade is a mix of classic cars, Rat Rods, and vehicles that are popular with collectors but not necessarily a classic. There are also Color Guards, military vehicles, and a touching tribute to fallen soldiers from the greater Eastern Washington area. It’s a somber start to the parade, but within minutes the sounds of revving engines and honking horns take over.

The parade mixed in Sister City representatives from Misawa, Japan, politicians, bands, and royalty. It was a beautiful combination of traditional parade groups and cars making it more than just a parade of vehicles. As to who had the most fun during the Classy Chassis Parade, it’s a toss up. The participants appeared to be having the time of their lives as they interacted with the parade watchers. Candy was thrown, laughs exchanged, and crowds were rewarded with revving engines and hopping Low Riders.

The Les Schwab Classy Chassis Parade was a highlight of my Wenatchee Apple Blossom Festival weekend. It was spectacular evening in Wenatchee, and as the sun began to set the cars looked spectacular in the evening glow, it doesn’t get much better than that!

Find more of my photos from the Parade and the staging area (unfortunately I wasn’t able to attend the Car Show on Saturday) on Flikr. I hope to have all of the photos available on Flickr in a few weeks.

The Disney Store Reopens at Bellevue Square – Unlock the Magic

Groupon Getaways: Out and About in Union, Washington