We have not been compensated for this post; my son is a State Park Ranger (who trained as a wildland firefighter while an intern at the Mississippi Sandhill Crane National Wildlife Refuge and my husband is a full-time firefighter and part-time wildland firefighter. It’s my pleasure to share this information about the Red-cockade Woodpecker Restoration project to honor all those who work to preserve our future.

Who doesn’t love woodpeckers? Well, my neighbor for one. We have a bird that perches up in our trees now and then, and while I love the reminder that nature is thriving right outside my window, he finds the noise it creates excruciating. It irritates him so much that it causes him to lose sleep. That turns the normally cool and calm man I know into a cold-blooded and ruthless hunter, and his prey is that darn woodpecker.

Luckily he only manages to scare it away much to my sorrow, but the woodpeckers we have in my tree here in Washington are not endangered. But that’s not the case for all them. In fact, the Red-cockaded woodpeckers that nest in old pine trees in the South have been on the endangered species list for over three decades. That’s because their habitat, old growth pine trees, many 60 to 100 years old, are disappearing from our earth far too quickly. Sadly, we human beings keep cutting them down. And what do we do with these amazing century-old trees? We make paper out of them or burn them as firewood. That’s insane to me.

The other problem is the change in our fire suppression efforts in forests which is also a man-made problem. We insist on building houses within forests so when a forest fire starts, wildland firefighters like my husband are sent to put them out. The problem is that fire is part of nature’s cleaning system – it clears out the underbrush, and the heat the fire generates allows seeds to germinate. But by eliminating the natural burn process, the forests are being choked by the undergrowth and the woodlands are failing. With the loss of their habitat, the number of Red-cockaded woodpeckers is declining. 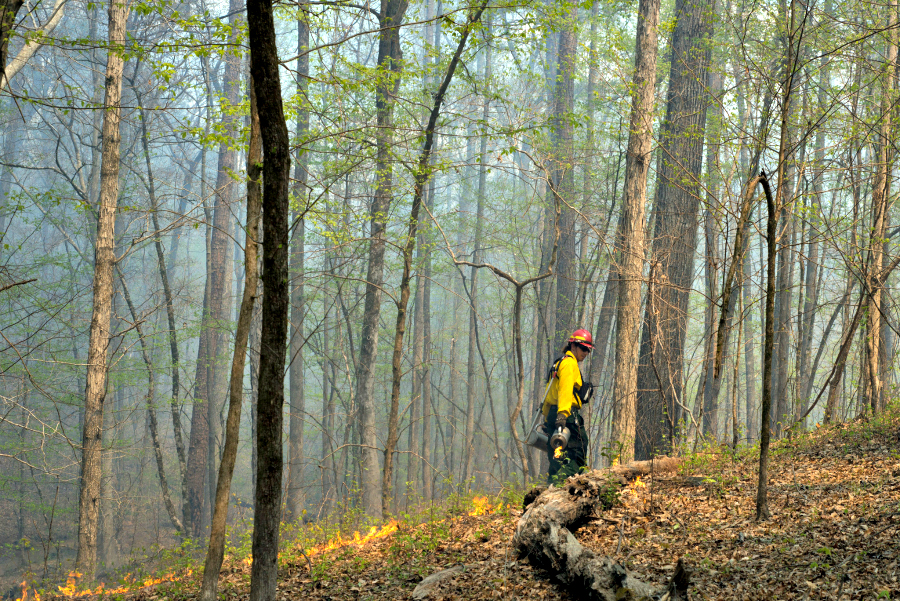 Piedmont C26 Prescribed Fire – Tyler Jarvis a SCA intern at Piedmont NWR ignites the forest understory with a driptorch on a prescribed fire at Piedmont NWR outside of Juliette, GA. – Creative Commons License

Before being added to the endangered species list in 1970, the Red-cockaded woodpecker was common as far north as New Jersey and as far west as Louisiana. At the time of their addition to the endangered list, there were fewer than 10,000 birds left.

But what one group of humans takes away, another works to restore. In this case, it’s the U.S. Fish and Wildlife Service, and they’ve got a plan to give these birds a chance for a comeback. The plan is to reintroduce these endangered birds in the Great Dismal Swamp National Wildlife Refuge in Virginia. They’ve been missing from the refuge since 1974, and the hope is that by reintroducing the birds, they’ll boost the nationwide population.

The location was chosen because the Great Dismal Swamp Refuge is home to a mature native pine forest, which includes around 2,000 acres of pine pocosin habitat. That’s a deep-soiled evergreen marsh that supports the grown of longleaf pine trees.

But saving these woodpeckers is going to involve some tricky dexterity on the part of the U.S. Fish and Wildlife Service staff. They’ll be relocating five mating pairs of the woodpeckers in October. At that time, their biologists will scale the tall pine trees to gather the five female and five male birds. Once they get on the road, they’ll have to stop to feed them every hour. Then when they arrive at their new home, those same biologists will climb to the pre-dug artificial cavities that will become the bird’s new home.

The birds will be kept in place overnight by a screen that will be placed over the cavity. In the morning, the ever-so-patient staff will wait until they hear the birds call out good morning to each other, and then they’ll remove the screens. With the cover gone, the birds will be free to go about their woodpecker ways while the dedicated biologists keep track of them while they get accustomed to their new home.

But what makes them think this relocation will work? Three previous efforts in Arkansas, Florida, and Mississippi were successful. In those areas, the birds are busy reproducing and populating as planned.

This Red-cockaded woodpecker project is just one of the 14 which are spread across 18 states that are being funded through the Service’s Cooperative Recovery Initiative (CRI). Their goal it to help recover endangered and threatened species near national wildlife refuges. These include the tiger beetle, Midwest dragonfly, the Southeast pitcher plant, and others. While I’m no fan of beetles, I recognize that they have a place in our eco-system and can you imagine a child growing up without the wonder of dragonflies? I can’t.

For more information on the 2015 projects and previous years, please visit the Cooperative Recovery Initiative.

[two_first] The National Wildlife Refuge System preserves wildlife and their habitat on land and water from the Pacific to the Caribbean, and Maine to Alaska. They also work to improve human health, provide open-air recreation and support local their local economies. You can find out more about their mission at www.fws.gov/refuges and follow them on Facebook and Twitter.
[/two_first][two_second] The U.S. Fish and Wildlife Service works beside others to conserve, protect, and enhance fish, wildlife, plants and their habitats for our benefit of all Americans, including those to come. You can find out more about them at www.fws.gov, or connect with them through any of their social media channels: Facebook, Twitter, YouTube, Flickr.
[/two_second]

So Much to Learn From the National Wildlife Foundation

Painted Rocks: What’s It All About and How To Find A Group