I participated in a campaign for McCormick Skillet Sauce and may have received incentives or free product; all opinions are my own.

You’d think that when the kids grew up and moved out that I’d no longer be rushing to get dinner on the table. It seems that although our life has changed since we’ve officially become empty nesters, we still have busy schedules, and finding time for the two of us to sit down and have dinner together is as fleeting now as it’s been over the last 30 years.

McCormick Skillet Sauces are made from natural spices and herbs. They’re available in 7 varieties including Smokey Applewood BBQ and Fire Roasted Garlic Chili Skillet Sauce. Find them at grocery stores nationwide for approximately $1.99.

Sure, I have some tried and true recipes that I can pull out on a moments notice, but some nights that’s not enough. Plus it gets boring eating the same thing repeatedly, though don’t get me wrong, I’m eternally grateful that we have an abundance of food. On those nights that I have no time, energy, or creativity it’s great to know I can get a little assist from McCormick. The same brand that fills my seasoning cabinet with abundance, also makes ready-to-eat skillet sauces. All that’s required is to add a own protein and dinner can be on the table in no time. Plus they’re a great way to jump start some kitchen creativity.

Creativity is exactly what I needed tonight. Tired and not feeling well, I wanted something quick and easy so I pulled out the McCormick Sesame Chicken Stir-fry Skillet Sauce and used it to create Baked Sesame Chicken Thighs. Sure, thighs are a little higher in calories, but they’re generally about half the price of chicken breasts. I used boneless and skinless chicken because I’m a vegetarian and it helps keep my meat handling to a minimum.

There’s plenty of McCormick Sesame Chicken Stir-fry skillet sauce in the package to do up to two pounds of chicken, but I only had a pound on hand. Free-range chickens are smaller because they’ve natural,  so it doesn’t look like much, but a pound is more than enough for my husband for two meals. Two pounds of chicken would easily feed a family of up to five.

I served the Baked Sesame Chicken on a bed of brown rice with an Asian Chop Salad made with savoy and green cabbage, grated carrots, chopped celery, sliced green onions, toasted slivered almonds, crisp wonton noodles, and sesame ginger dressing. I added sliced oranges and grape tomatoes to round out the meal and add a little color. If I’d have been feeling better, I would have toasted some sesame seeds to garnish the chicken, but sliced green onions was all I could muster tonight.

My husband loved that dinner was ready when he got home and I loved that I could lounge on the couch while it cooked fuss-free in the oven. Totally a win/win for us both.

How long your thighs take to bake is dependent upon on how big they are and how close together they are in the pan. Since mine were very close and mostly submerged in the sauce, they took a longer to reach 160 degrees Fahrenheit. If you put them in a larger pan where the liquid just covers the bottom of the pan, the sauce will caramelize and the meat will cook faster. I wanted a sauce to moisten the rice, so the baking dish was a better choice for me.

Do you have a shortcut you use for getting dinner on the table without a lot of fuss? Have you tried McCormick’s new skillet sauces? 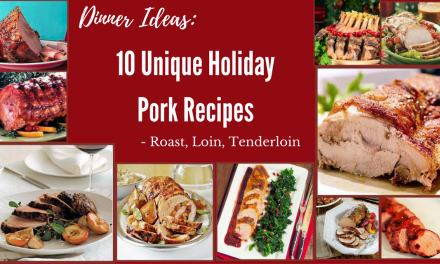