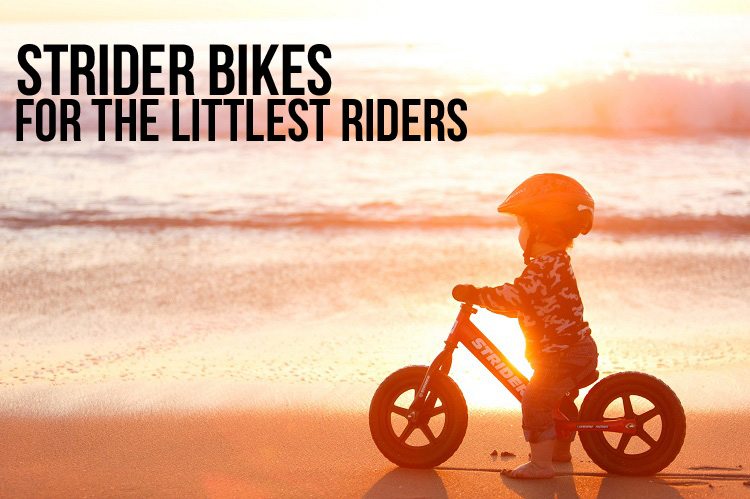 I received product to facilitate this review but all opinions are 100% mine.

My preschooler LOVES to ride his bike. I mentioned before that he started riding his bike without training wheels a couple months ago, and we owe it all to the Strider Balance Bike.

Strider bikes are lightweight, all-terrain, efficient bikes that develop two-wheeled confidence, balance and coordination in children. They’re designed for kids as young as 18 months (my toddler just hit that this week!) and allow kids to get used to the feel of riding a bike without the distractions of training wheels or pedals. It’s such a simple idea but it really works. I have no doubt that my preschooler got the hang of no-training-wheel riding after only a couple of weeks on the Strider because he got his confidence up so quickly by “safely” using his feet to go and stop.

Strider Sports International all began when a real dad, Ryan McFarland, tried to solve a real problem — helping his two-year-0ld son learn to ride a bike. He started cutting away all the heavy, cumbersome parts of a regular 12″ starter bicycle and designed the first Strider prototype, which thousands of kids use today to learn to ride. I love this quote from Ryan’s personal account:

“My son hopped on the bike and started walking without giving it a second thought. 100% of his focus was now on keeping the bike upright and centered under him as he walked. In short order, I could see him “experimenting” with holding his feet up between steps… trying to coast ever so slightly. At first, quite wobbly and only going inches before dabbing his feet back to the ground. But, he wasn’t FALLING, and he wasn’t SCARED, because his feet were on the ground. He was actually self-motivated to keep trying to glide further and further each time… with repeated “Watch me! Watch me!” as he beamed with pride. I simply let him play and learn at his own pace, and soon he was balancing and gliding at will, riding down hills, over the grass, and through puddles.”

My older son didn’t get on a Strider until he was 4, but with my toddler quickly coming up in the ranks and dying to try anything and everything his older brother is doing, we couldn’t wait to get him up on a Strider. Like I said, he’s barely 18 months, but he’s already showing signs of getting the hang of this bike thing and screams when we try to take him off. I think it’s still a little advanced for him (he’s young, plus he was a late walker so he’s still working on balance in general) but once winter is over I bet he’ll be ready to go. Can’t wait to see if he’ll beat Big Brother’s no-training-wheels record by a few months (or years!).

Strider Bikes come in three sizes (all in a variety of colors): 18 months – 5 years, 6 – 12 years, and 13 years+. There’s also a full line of parts and accessories, including helmets, bike accessories and apparel. Tune into their Youtube channel for tips on assembly and to watch other kids loving their Striders. They’re the lightest balance bikes around with the lowest seat height, making them the best choice for kids starting out.

Have your kids tried a Strider bike? How long did it take before they were off and running on a “real” bike?

LEGO News – The Inside Scoop on What’s Happening this Summer

Aurora World Creates Fun Toys for Children of All Ages

Inside Out Toys: Disney Store Exclusives and Mass Retailers

Thinkway Toys for the Holidays – Shop Your Favorite Characters