Fitness tracking devices have been available in the market for some time now, so it’s hard to come up with something that’s different and adds value to the saturated field of wearable tech devices, but the Microsoft Band may have done just that.

Our in-store demo was provided by Brett. He was incredibly animated, kind, funny, and knowledgeable and a huge cheerleader for this new product.

What’s the Difference between the Samsung Gear Fit and Microsoft Band?

The first, and probably most important difference between the Samsung Gear Fit and the Microsoft Band, is that the Band works with Windows, Android, and iOS devices. The Gear Fit is propriety and only works with compatible Samsung devices. That opens up the Band to a much larger audience of users.

The Microsoft Band also upped the ante by adding a heart rate monitor. It’s currently the only fitness device that has this function without the addition of an accessory like a chest band. If it’s accurate, it would be a phenomenal feature for fitness buffs who want to be sure they’re exercising in their targeted heart-rate zone.

According to Microsoft, the heart rate monitor is also used to get a more accurate sleep rating. That’s because unlike most sleep monitors that simple track the movements you make at night, the Band tracks your heart rate.

The third major difference between the two devices is that the Microsoft Band has built-in GPS which maps your route and measures your pace and distance.

Like the Samsung Gear Fit, the Microsoft Band shows you whose is texting, calling, or emailing and allows you to reply with a pre-written note to the sender right from your wrist. Users can also get their latest Facebook posts and Twitter stream activity and if you’re using it with a Windows 8.1 phone, you can access Cortana and set reminders verbally.

Wearers can also stay connected with weather updates, a stock ticker, and turn it to watch mode so the time is displayed continuously.

Because the Microsoft Band doesn’t have audio capabilities, nor does it have a speaker or camera like the Samsung Gear 2 smartwatch, it’s much smaller and sleeker, and for me that’s a plus. The gargantuan smartwatch/fitness combo devices feel bulky and clumsy. But if taking calls without removing your phone from your pocket is a priority, try a Bluetooth ear bud or headset in addition to the Band to give you the extra calling functionality you need. As for photos, pulling out your phone is still the best option right now.

Even the kids were enthralled with the in-store demo – Brett kept the pace lively and he interacted with everyone throughout the demo.

The style of the Band  is very much utilitarian- there are no feminine features –  it’s very much a unisex design. There’s nothing pretty about it, but you wear it for the functionality, not because it matches your shoes. It’s water- and sweat-resistant and the bright screen is easy to read and can be personalized.

There are other features we didn’t cover in the in-store demo but information is available on the Microsoft website. One interesting feature is the expert-designed workouts. The Band gives you exercise prompts right on your wrist. There is also a timer and alarm to time your laps or wake you in the morning. Plus it allows you to set goals – choose from daily steps, calories, and more – and the Band rewards you for meeting them.

The Microsoft Band is the only wearable tech device that I’m aware of that has a UV monitor – the purpose is to take a snapshot of the current UV conditions and let you know if it’s time to put on the sunscreen.

The Microsoft Band is currently compatible with RunKeeper, myfitnesspal, and Gold’s Gym so you can continue to use existing online services to keep your data or you can use the free Microsoft Health platform which is built into the free app.

Special thanks to Brett and the Microsoft Store crew for answering all our questions about the device.

Is the Microsoft Band Better than the Samsung Gear Fit?

So were all these extra features enough to have me dump my Samsung Gear Fit for the Microsoft Band? Fortunately, I didn’t have to make that decision. The Microsoft Band went on sale on 10/30/14 when the store opened. The store I visited at 2:30pm had already sold out. There were display units available in the store and employees were fantastic about explaining the features to anyone interested. But because I haven’t tested the Band, I can’t recommended it one way or the other. For now I’ll watch for user feedback and then decide.

What do you think – will be all be wearing fitness trackers and smartwatches  in a few years? 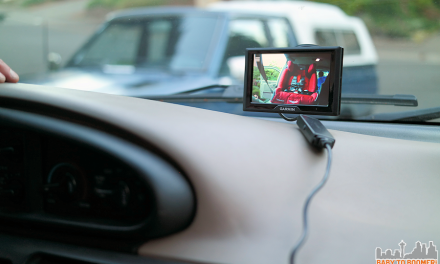 Garmin Drive 50 with BabyCam: Keep Tabs on Baby While Driving