A fun highlight of the 2014 Go Further with Ford Trends Conference was when they let us loose on the Ford Test Track in Dearborn. We had a chance to hop in a Ford car of our choice and take it for a lap around the track, which was great fun! It was a little like musical chairs – we approached a lineup of several different cars and trucks, grabbing whichever one caught our eye and taking it around the track. After we finished our lap, we’d get out, then hop into another car in the line.

Sheila gets ready to drive!

I rode shotgun with my friend Sheila of Living Smart Girl for our first lap around the high-speed track. When it came for me to pick a vehicle, my naturally cautious self thought, “I’ll choose a nice, small, easy to drive car.” So it was quite ironic that the only car left for me to grab was a behemoth of a truck: The Ford Super Duty F-350. This is the largest vehicle I have ever driven in my life; seriously, this thing is huge – this video does a good job of illustrating the scale!

It’s good for me to step outside my comfort zone, and racing a gigantic truck around a track was a fun way to do that! During my lap, a sudden thunderstorm started, and I wasn’t sure where the wipers were on the car as we all pretty much just hopped in the vehicles and started driving immediately – there was barely enough time to even adjust the pedals to my shorter feet. 😉 One of the Ford reps was sitting next to me, and said, “Don’t worry about trying to find the wipers, I’ll turn them on – you just focus on driving.” So he had to reach over and get the wipers going while I drove – it was really funny, and Sheila got a picture from the back seat!

Turning on the wipers

As I finished my lap, flaggers directed me to a parking spot marked with cones. Because of the immense size of the truck, I ended up crunching one of the cones as I parked. Ooops! Later on, another Ford employee told me, “I did the same thing – that truck is huge!!”, so I didn’t feel so bad. 😉

When I got out of the F-350, the rain was coming down so heavily that I ran straight over to the car parked next to me, scrambled into the passenger seat, and told the journalist sitting behind the wheel: “I’m riding with you because I don’t want to stand in that rain!” He laughed and as we made our way around the course, it turned out that he was from Canada but had visited my home of Seaside before, so we ended up discussing the finer points of playing Fascination during our lap. I’m telling you, it is an incredibly small world!

After that lap, the rain and thunder had gotten so bad that we actually had to go inside and wait out the storm for about 45 minutes until it was safe to continue. After the storm lifted, I got to take a spin around many other Ford vehicles, from the Ford Transit to the Ford Focus. But the coolest by far was getting to be a passenger in a driverless car!

This driverless car prototype is controlled remotely – it’s incredible to see this technology in action!

My day at the Ford Test Track was very fun and interesting. From racing around in the largest truck I’ve ever driven to sitting back and letting a car drive itself, this was a day to remember!

Chrysler Town and Country: 42 Safety Reasons to Love this Minivan 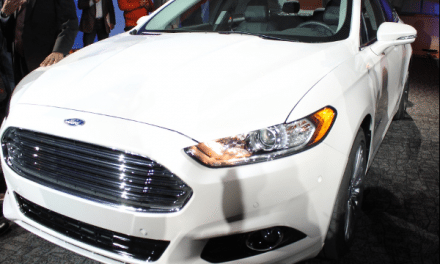 Virtual Reality in Car Design: Welcome to The Future! #FurtherWithFord

Tred Test Drive: Seattle Start-up Brings the Car to You