I wrote a bit about my secret trip to LAIKA to find out more about the Boxtrolls a few weeks ago. You can read that post, The BoxTrolls: How LAIKA Animators Brought this Story to Life first if you’d like for more information about the trip and the film, but today I want to tell you about the incredible puppets and the people behind them.

What’s Inside a Boxtroll Puppet?

These are no ordinary puppets. Stop-motion animated puppets are built from the inside out with a concentrated effort on making sure the resulting character moves realistically and is able to tell his story with the nod of its head or the flick of its finger.

So what’s inside the puppets? Magic! Ok, so that’s not exactly true, but they seem magical when you watch them on screen. You’ll have to remind yourself that what you’re seeing is not live-action, but actually puppets created on a skeleton of wire, nuts, bolts, and anything else the artists find useful in putting them together.

The puppets start life as a clay creation called a maquette (many animated characters start out in the same manner). This clay sculpture is then molded and cast in resin where they start taking shape and gain their mobility.

The Boxtrolls: Behind the Scenes

This video shows how the puppets and sets were created. Enjoy!

While the basic process of creating these puppets hasn’t changed since “King Kong” was filmed, what has is the size of the wire used to give the characters their shape. These new-generation articulated puppets use thin metals that have been improved over the years which gives them more fluid movement.

This internal skeleton is call the armature and that’s what allows the animators to move nearly every single piece of the puppet’s anatomy to create a scene. This armature is covered with the resin and they start to take shape. When the characters are on set, their feet are drilled into from under the stage to hold them in place. However, some characters have trouble standing – they may be designed top heavy which looks great on film but isn’t mechanically possible. To give them more range of motion, rigging is used to complete the task.

Rigging is an external armature-like structure that allows animators to move characters in ways not possible without assistance (for example, flying through a window). The character is suspended from the rigging, completes the scene, and then the rigging is digitally removed in processing. But these are not the only improvement that has been made in the process.

In fact, Laika created their own Rapid Prototype printing system that allows them to replicate a character’s face (or fingers, feet, etc) with a 3D printer in every facial expression necessary for the film. The result is thousands of facial pieces for the lead characters and hundreds for those with less screen time.

Artist’s create the faces in 2D and then print them in 3D after they’ve gotten the expression they need. Lead character faces, like Egg’s, are generally made up of about 5 pieces – the base face, eyes, ears, but there are up to 80 pieces in each face. These key pieces though are the ones that are swapped out, quickly to allow an animator to complete dialog (though “quickly” is a relative term here – a single scene can take a month to film and require hundreds of faces or face pieces to complete). For example, slowly say the alphabet slowly and notice how many changes your facial features make to create a single letter. That’s what the animator has to capture to make the character appear to be speaking. In the past, the animator manually moved the eyes, eyebrows, etc., a fraction of an inch and shot a new photo. Now a tray of faces are created and they shoot them in order (though it’s still a slow process). The drawback of this pieced solution is that there are lines where the pieces meet which must be erased digitally later. Some scenes are best shot with full faces so those are created as well. 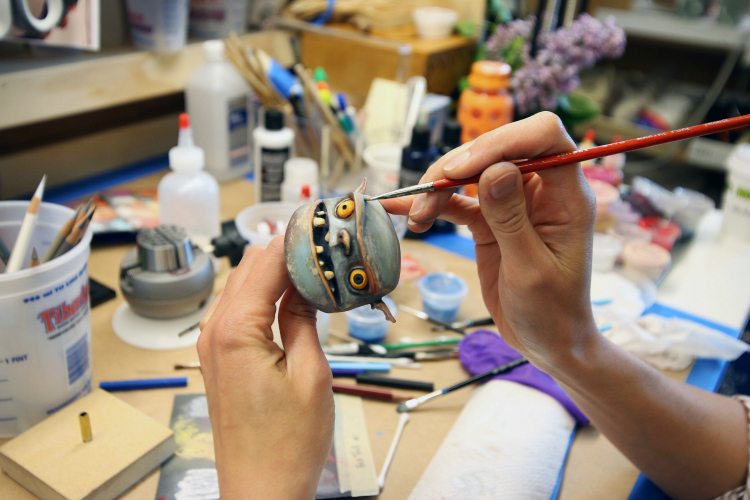 So how many faces were created for “The Boxtrolls?” In total 52 thousand and each one had to be designed, printed, checked for flaws, sanded, painted, numbered, shot, and stored. It takes five 3D printers and a team of approximately 50 artists and technicians to create them all.

I had a chance to watch their 3D printer in action and I was pretty impressed. They print batches of faces at a time which takes about two hours total from start to finish. To demonstrate the capabilities of the printer, they created small, flat plastic wrenches with the Boxtrolls logo on the side. These little souvenirs impressed everyone when it was realized that they actually worked! When the small thumb screw was turned, the wrench opened. Sadly I lost mine on the trip home – I would have loved to share it with you. But it demonstrated out 3D printing can be used to create moving parts on the puppets.

Once the puppets are complete, they’re ready for costuming. This department is made up of approximately 60 artists who are responsible for hair, makeup, and costumes. I got an up-close look at some of the 200 costumes required for the film and a chance to see how they’re made.

It was interesting to note that they used clothing from the late 1930’s of Victorian England to inspire the costumes for the Boxtrolls. We were shown an enormous inspiration and creation board which showed very militarist pieces next to sweeping ball gowns, very evocative of the spectrum of fashion at the time. They took these inspirations and created 200 costumes that had to be hand fitted onto each puppet.

To create authentic looking fabrics, they used hand dying and etching to create textures in the appropriate size. Human fabric would have been out of proportion and noticeable. The artists worked to create a weave that was proportional to the Boxtroll’s size which allowed them to create the look of knitting in sweaters even though it would be impossible to knit in such a tiny gauge. How tiny? The baby clothes Egg’s wears in the film are only 4” wide and the smallest piece of clothing in the film? His baby sock at 5/8” long.

But they went far beyond just the look of the costumes, they had to figure out how to make them move and flow like real clothing. One of the toughest scenes is in a grand ballroom where the lead character, Eggs, must do a waltz with the lead female. To figure out how her dress would flow without showing her wire armature, they brought in two choreographers from the Portland Ballet to reproduce the scene. They used film footage from the live dancers to create a dress that was floor length to cover her legs, which for the dancing sequence were replaced with springs to allow her to move correctly, and they worked with fabrics, wire, and more until they got the right drape and style. Once they were perfected,  duplicates of each outfit were created in the event one was damaged or two animator’s needed the same costume on the same day.

The entire process of the puppets and what goes into their creation is truly amazing. You’ll be even more amazed when you see them on screen.

THE BOXTROLLS releases in theaters on September 26!