It’s only day 6 and things are not any better in FOX’s Utopia than they were the were on day two. If anything, they’ve proven what I said before, humans are their greatest enemy. Before iI tell you about the tantrums going on, let me update you on some of the other events.

First the second “Pioneer” was taken to the hospital (the first was taken for dehydration over the weekend and returned). This time it was the Preacher who’s thumb was broken in an impromptu baseball game with a ball made from tape and burlap. It turns out he’s broken the thumb before and it was held together with pins, but he’s working one-handed for now until he’s able to get it fixed and eventually cast.

FOX Utopia: Religion – The Christians and the Atheist

Religion is playing a large part in Utopia and it’s almost impossible to get away from it. Bible studies are going on throughout the day and the Preacher adds his take on the days events as they relate to the Bible. Verses are going up on the walls of the living areas and several participants are sharing their views on homosexuality, marriage, and more. Sadly hypocrisy is raising its ugly head and not by the Atheist (though it appears Dave is an Atheist as well, though he’s confessed to Red he’s considering changing). It’s the pregnant, non-married mother-to-be that’s most judgmental which given her obvious breaking of the Good Books rules is kind of sad. Evidently she hasn’t read all of the 10 Commandments.

Nudity has also become a hot topic. Several of the women are comfortable with bathing naked. One is especially courteous and always makes sure the Preacher isn’t around and asks anyone in the area before undressing. Unfortunately, one of the people she asked that said “no problem” latter confronted her and said several of the men were uncomfortable with the nudity. That’s an issue that hasn’t been resolved because the Chicken Tractor and Radish Wars broke out.

Caring for the chickens and the garden have turned contemptuous as well. The funniest argument today was over the difference between a chicken tractor and a chicken transporter. What’s the difference? Well, one moves chickens from one place to another, the other is the temporary penning up of chickens to work the land before planting. Yea, evidently Bella isn’t good at letting people know what she wants, but when she does she’s told she’s pushy. What a nightmare.

Check out Bella’s “No Respect” meltdown

Red (the toothless hillbilly) and Dave (the unemployed ex-con) have been the biggest disappointment. Actually both have been in jail and that’s the common bond between them. Over the last few days they’ve declared independence from the group, threatened members of the groups, and pretty much have been a thorn in everyone’s backside. Their idea of freedom and fairness is that the $5000 seed money be split between all of the participants and they only have to pay towards things they want to have.  For instance, plumbing. The ex-con would rather pee in the yard than pay for a toilet so he thinks he should be exempt. BUT, they want any money anyone earns be split between the entire group. Seriously! They say having to spend money on things they don’t want means they’re living in Communism.  So they why do they want to take half of the salary everyone else earns?

The ex-Con spent yesterday arguing with the Doctor over what nutrients a body needs. He says everything we eat is broken down into glucose so all they need to eat is white rice, canned beans, tuna, and peanut butter and jelly. The Doctor tried to convince him that what’s important is nutrition, not volume. He continued on his rant, repeating himself over and over, saying things like, “Rice, beans and canned vegetables, that’s all we need. What’s wrong with these people, a bunch of squares. They’ve never survived a day in their life…. three or four people in jail eat out of one can of tuna….they aren’t worried about nutrients….if you want it that bad, grow it.”  The rant has continued on through today and he refuses to accept anything but what he wants and has threatened that if he doesn’t get what he wants, he’ll make it happen. The threats from him and the redneck (self-described) come all day long and neither see that they’re complete idiots and totally hypocritical.

How childish has it gotten? The hillbilly and the ex-con started destroying the existing food by throwing the cans to the ground and crushing them with their feet. After that Red stole the phone charger and refuses to give it back. He’s also threatened to pi*s on the food when it arrives and later to “tear it up” and throw it in the lake. 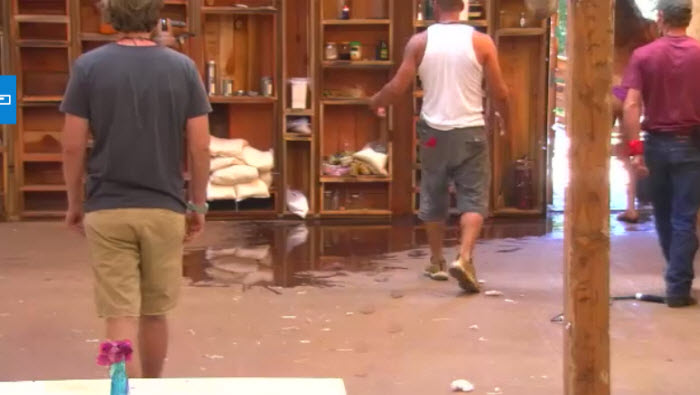 He’s decided that since pickled radishes were put on the food order without his permission, he wants his cut of the seed money and he’ll decide how it’s spent. All the while the ex-con is wandering around in the background talking to himself….”I want my money…I ain’t paying for a toilet, I got the hillbilly toilet….I don’t need no shower.”  These two have been throwing tantrums for several days and the latest one is about radishes. Oh, and sweet potatoes.

The worst part of Red is that he’s admitted he came on the show to push the legalization of pot in Kentucky and as soon as production said he couldn’t smoke on the show he threatened to leave after arguing with another cast member. He admits concessions were made to get him to stay, his boots mysteriously appeared that he threw a tantrum because they weren’t put in the box (part of their initiation into the Utopia compound).  He also whispered to another cast member that people who are contentious make great TV. I HATE that. I hate that it feels like he and the ex-con are acting, but honestly, I hope they are because these two people are insufferable.

FOX Utopia: Hurt Feelings All Around

Arguments, hurt feelings, abound with everyone trying to assert their expertise on everything. Everyone thinks they have a better way to do all the tasks at hand and there’s no organization. No one has been put in charge, they’re still arguing over whether or not voting needs to be by majority or super majority, and a small fraction are still threatening to secede (and most would be happy to see them gone).

As I hit “publish,” this argument has been going on for almost two hours and these two idiots just keep repeating the same old arguments and threats. “I just want to eat like we do in jail” is the ex-con’s mantra.

FOX Utopia: Will the Majority Kick Out The Hill Billy & His Ex-con Little Buddy?

More meetings are about to be commenced. It’s been incredibly eye opening about how selfish some people can be.  With thinking like, “White rice blows up more…they want to order brown for the nutritional value (accompanied with an eye roll and sarcastic tone),” that the ex-con can’t get past they have no hope. And sadly that’s why government doesn’t work. Too many people like ex-con Dave and redneck hillbilly Red who can’t see the whole’s need through his individual needs.

The majority are tired of the rantings and ravings of these lunatics so they’re going to have a meeting about splitting up. After they didn’t kick out the sexually inappropriate male cast member on the 2nd day, I’m guessing they won’t and they’ll continue to try and work with these two.

Have you tried watching Utopia? It’s a look at how we fail at humans every single day so what can we learn from this?

Oh, think I’m making fun of them by calling them names? Red calls many of the participants by their occupation and both names they’ve both called themselves in their intro videos. Before I go, Mike just said Red is “the Honey Boo Boo of Utopia.”  I couldn’t agree more.