It’s not time to put away that outdoor grill yet! There’s still time to use the barbecue grill before it’s time to pack it away for the winter; however,  you’ll have to plan ahead for this tender and flavorful Holland House Recipe: Grilled Chipotle Skirt Steak. That’s because while the marinade only takes about 10 minutes to prepare, you’ll have to let it work its magic on the steak overnight. But if you do, you’ll be rewarded with a juicy and flavorful piece of beef that can be used in so many ways. Use it on a salad, as filling in tortillas, or on its on.

This recipe can also be made with chicken and you can take fresh meat, add the marinade, and then freeze it! When you’re ready to cook, just put it in the refrigerator the night before and the next day it’ll be thawed, marinated, and ready to go!

Can't find skirt steak at your local store? You can substitute Flank steak, but it's a thicker cut. Score the flank steak on both sides with a knife so that it's able to absorb more of the marinade It also has less fat, so you'll want to marinate it longer to break it down and make it more tender.
Wordpress Recipe Plugin by EasyRecipe
3.5.3251

This recipe features Holland House Sherry Cooking Wine. It’s one of several product they produce perfect for the grill and grilling season. Their cooking wine is great for marinades, sauces, glazes, and sautes. They’ve created several varieties including Marsala, Sherry, Red, and White which are staples in some the best savory meal recipes.

For more information, tips and recipes, visit www.HollandHouseFlavors.com. You can also check out Holland House on Facebook and Pinterest as well as the  Holland House’s marinade and grilling cooking video

One winner will receive a  portable cooler is brimming with approximately $100 worth of grilling tools and Holland House Cooking Wine products! Holland House provided the prize pack and recipe for this giveaway. 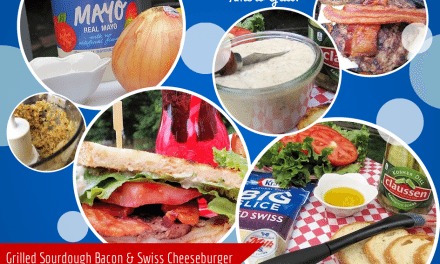