Dalai Lama Quotes: Roots and Wings – A Lesson on Parenting

I made a  needlepoint wall hanging of this [amazon_textlink asin=’0743453360′ text=’Dalai Lama‘ template=’ProductLink’ store=’associateslinkbuilderplugin-20′ marketplace=’US’ link_id=’7e9e7fcc-0c9f-11e8-8ccd-c72e0f1da1d6′] quote while I was pregnant with my second son. I had been a mom for almost 18 months, and at that time it hit deep into my heart. We’d just come home from the emergency room where we’d had our oldest son’s bottom lip cleaned after his teeth went through it leaving a hole that went all the way through.

He got the injury by running into the foot of our bed. It was a traumatic accident – so much blood – and being pregnant made me even more emotional for me. I suppose that’s why the quote hit me so hard. I had to let go of the guilt of my son being injured. We were playing, laughing, running and he fell. I had to let it go to let him go and be an active 18-month old baby. I couldn’t bubble wrap him. It was the first time I realized I really couldn’t keep him safe.

Sometimes letting a child go to make mistakes is easier said than done, but in their lifetime, you’ll have to let go of your child at times when you want to keep them close and safe. You never lose that urge to protect your child, not even after they’ve become adults.

As toddlers, you protect them from bumps and falls, but as they start their school journey, it’s from bullies and those who tease. As they enter Jr High, it’s broken hearts and the betrayal of friends. In High School, it’s the panic of becoming an adult and choosing a path. This emotional journey continues into adulthood as they choose a career, a spouse, and make their own life choices. It’s hard to watch your child do something that results in hurt or loss no matter what their age, but sometimes we have to let it happen.

Parenting is about Balance – letting go and welcoming them back. No one ever said it’d be easy and yet each new parent thinks they’ll be different. They and their child will have the relationship no other has accomplished. It will be perfection. And then reality hits and they realized the vast majority of parents are truly doing the best they can with the resources they have. So if you’re contemplating becoming a parent, know that it’s the toughest job you’ll ever have, and you will fail at it many times, but there will be just as many successes. Wait until you’re ready to accept the mistakes, learn from them, and become better for it.

What’s your philosophy on parenting? 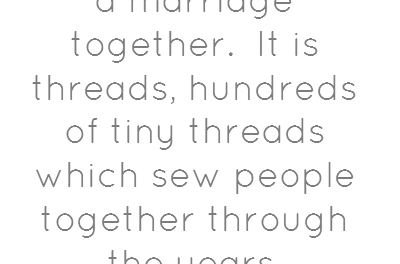 Happy Marriages Quotes In Celebration of my 29th Anniversary

Gardening Quotes to Get you in the Mood for Spring