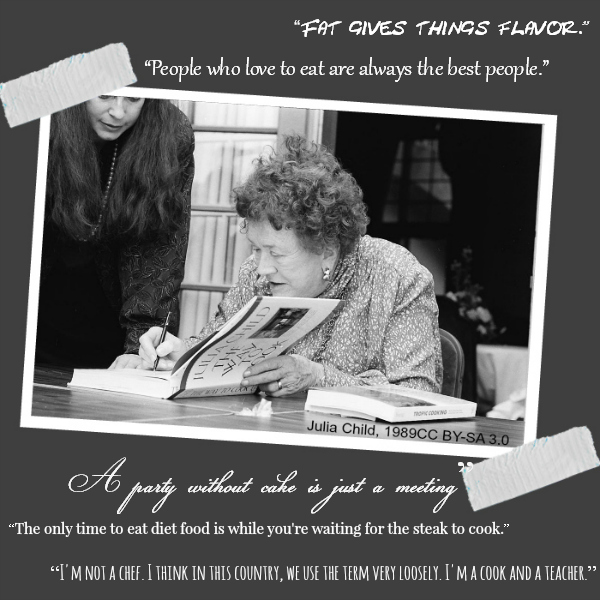 This conversation about Julia Child and her impact on my life including her recipes, quotes, and books was made possible by Foodie.com

It’s no secret I’m a fan of Julia Child. I have been since I was young. I loved to watch her show on our local PBS channel because her voice fascinated me. Plus she talked about ingredients and used terms I’d never heard of. I found her to be quite funny, though I suspect she didn’t mean to be as funny as she was. I giggled every time she  mispronounced words like “beef,” which she pronounced “boeuf.” It took me years to figure out she was speaking French.

I think it was my enjoyment of these early shows which sparked my interested in cooking. I learned about measuring precisely in baking and by taste for everything else and how to prep ingredients.

Even then, the sight of the meat was disturbing, but somehow I was completely mesmerized by her gigantic meat cleaver she used to hack up carcasses. I learned a lot about weird meats we never ate at home and it was through an episode of her show that I found out the truth about Sweetbreads and Headcheese (my grandma lied to me!).

I eventually became a vegetarian, but I never lost my love of watching Julia. Even in later years I was thrilled to catch her on a talk show or in a newspaper article. Though our palates were vastly different and Julia never lost her love her meat, organs, and more, I still appreciate her cooking style and the path she created for other women in cooking.

Some of these recipes were written by Julia in one of her cookbooks, others are inspired by some of her most popular creations.

Check out My Ode to Julia Child

Julia Child: “My Life in France”

Child shares her struggle to be accepted into and then graduate from Le Cordon Bleu in her book,  “My Life in France,” parts of which were combined with “Julie and Julia: My Year of Cooking Dangerously,”  to create one of my favorite films, “Julie & Julia” starring Meryl Strep and Amy Adams.

As Hollywood will do, they changed many of the facts of the story and they really didn’t need to. The original story was fabulous on its own, but piddle with the story they must, and While I find the movie very entertaining, I was dying to know the true story.

To find out what really happened in France and New York several decades apart, I decided to read both books. I read  “My Life in France” first and highly recommend it to foodies, but also anyone interested in women’s issues, the 1950’s, and relationships during that time.  There’s a lot of information about the culture of women, of cooking, and of living abroad  that explains that time in history very well.

As for Julie Powell’s blog-turned-book effort, skip it unless you enjoy whining, immaturity, and curse words. This is one time Hollywood cleaned up and improved on a book when writing the screenplay. The film’s happy ending, though not real, was perfect.  I managed to get through it, but it was obvious why the film was written to include Julia’s story. It would have been a much different film if it’d been based solely on Powell’s memoir (though some have doubted that it was real) . Her second book,” Cleaving: A Story of Marriage, Meat, and Obsession“, was impossible to finish.

Are you a fan of the cook who taught?

Top 12 Summer Recipes of the Week via ZipList #Recipe

How to Make Cherry Juice – 4 Easy Methods to Choose From

How to Freeze Sweet Cherries Whole – Preserve the Taste of Summer

How to Dehydrate Cherries: Dry Your Own Whole Fruit