Anyone Can Be a Hero – Murphy-Good & Operation Homefront

This post brought to you by Murphy-Goode Winery. All opinions are 100% mine.

I live with a real-life hero. Of course he’ll tell you that he’s not. That he’s just someone doing his job. But I know better. Sure, he’s a structural and a wildland firefighter and he saves lives every day, but he’s a hero to me because he is, and has been for the last 30 years, the best father and husband imaginable.

But I’m not the only one who lives with a hero. Heroes surround all of us. There are some that do heroic things because of their line of work. They included nurses, doctors, teachers, police officers, military personnel (both active and retired), firefighters, and anyone else who steps in and steps up in time of crises.  They’re people WE seek out when we’re scare, sick, or frightened.

There are other heroes who do what’s right when the need arises and they step up without expecting anything in return. They create heroic moments every day when they stop a child from being harmed, lend a helping hand to someone in distress, or help those who’ve experienced loss pick up their lives again. It’s these little heroic moments every day that keeps me believing that there is good in the world. 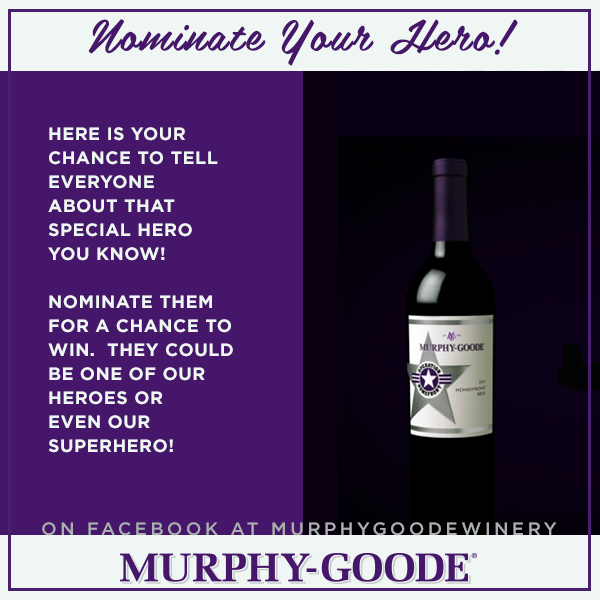 I’m not the only one who has noticed that doing good things means good things for all of us. Murphy-Goode is a wine brand with a social conscious who’s partnered with Operation Homefront to raise money and awareness for the cause. Each year Murphy-Good creates a special blend wine to benefit the charity and then they donate .50 cents of every bottle sold during the campaign – their donation annually exceeds $300,000.

Murphy-Goode would like you to vote in their “A Few Goode Heroes” contest via their Facebook page. Heroes have been nominated and now you get the chance to decide which heroic moment touches you most. There will be four winners who each will win a $500 donation to the charity of his/her choice as well as a matching $500 in their name to Operation Homefront.  One Super Hero Prize winner will receive $1000 to the charity of his/her choice and $1000 to Operation Homefront. 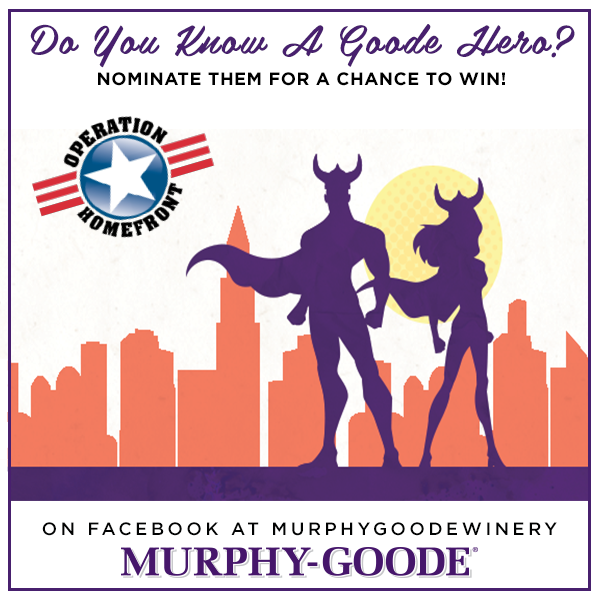 Vote now through May 19, 2014 for A Few Goode Heroes and then get out there and create your own hero moment!

1 in One Hundred Million™ – May Video Recognizes Major William Saint

Car Seats: Is Yours Installed Correctly? Find Out at #therightseat Twitter Party

Mother’s Day 2014: Honor Your Mom and Contribute to a Good Cause #MyHeroMom #MC

World Vision: Gifts that Give @WorldVisionUSA