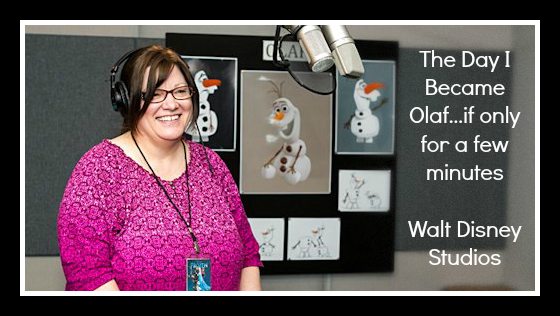 I participated in a FROZEN/Pirate Fairy Press Event which included a tour of Walt Disney Studios and a chance to record the voice of Olaf.  Disney provided transportation and accommodations; all opinions are my own. Read more about this event here.

A few months ago I got the opportunity to visit Walt Disney Studios and while I was there, I got to do some voice recording in their studio. It’s the same studio that Disney stars have recorded in for decades and actually my second time to try my hand at it. The studio isn’t fancy and it looks much the same when big box office superstars come in to record. In fact, you can see Josh Gad the REAL voice behind Olaf in the same recording studio.

Granted, Gad had it easier as he recorded his dialog before the film was animated. In fact, about 99% of the film’s dialog is completed by the voice actors before animation is begun.  With technology the talent can be in another location, even another country, and the sound artist mixes the recordings to make them appear as if the voices are actually talking together.  The Director and Producers are often in the session to give notes to the actor and give help inspiration behind the dialog and the voice actor actually records the same line multiple times until he or she has created plenty of options for the director to choose from. Voice actors are generally recorded individually, though for FROZEN, they did bring in a few of the characters in to record together so they could interact.’ They also used a remote studio for recorded Santino Fontana, the voice of Hans, from New York City. He was performing on Broadway in “Cinderella,” so his part was taped between shows and on his days off. Once the creative staff feels they have enough dialog to complete the film with the right tenure, they forward that to the animation department who uses it to actually create the animation. The way a line is said will help decide how the animation will go – facial and hand gestures are drawn to coordinate with the line. The recording we did is more for post animation clean-up. When a bit of dialog needs to be tweaked, generally not an entire line and unlike Gad, we only got one chance. Here’s my attempt at taking on the voice of Olaf.

So what do you think? Could you do it?