Japanese Ikebana for Every Season – It’s More Than Flowers

I received a copy of “Japanese Ikebana for Every Season” to facilitate this review; all opinions are my own.

My first impression of the book “Japanese Ikebana for Every Season” is wow! It’s a stunning book from cover to cover. But what is Ikebana? I didn’t know either until I read the book and it turns out it’s something I’ve loved but didn’t know the name for.

Ikebana is a disciplined art form where humans interact with nature to create a floral arrangements that emphasizes the natural form of the plant or flower. Artists use more than just the blooms of flowers, they use stems and leaves as well. The pieces tend to be more minimalist overall, but there are some that fit into the Ikebana category that could hardly be called minimal.

Japanese Ikebana for Every Season

The book is written by Yuji Ueno and Rie Imai and photographed by Noboru Murata. It includes full-color, full-page photos that are beautiful enough to frame. It also include some step-by-step photos to show you just how these beautiful pieces of art were created.

I especially loved the information on how to build your own natural floral supports rather than using florist’s foam or frogs. Instead the artist builds a natural arranger out of copper wire or snapped twigs placed at angles inside the container.

As you can imagine, all four seasons are covered – Fall, Winter, Spring, and Summer – with each featuring flowers and plants commonly found at that time of year. They also highlight different colors and shapes to denote the differences in the seasons.

The authors cover container selection, flowers and their characteristics, and how a specific arrangement would be constructed based on the best viewing for it.  For example, an arrangement for the dinner table would need to be viewed from the top and all sides, whereas one placed on an entry table may only need to be viewed from one side. They share how to construct them for your needs.

Suggestions are made for unusual containers to fit the overall tone of the event or location. For example, an antique teapot is filled with candytufts flowers and fresh mint representative of the Japanese tea ceremony. Using the teapot as a flower container is unexpected.

From “Japanese Ikebana For Every Season”

In fact, part of the art of Ikebana is looking at items in new ways and using them in unique approach which brings them new life. The writers encourage you to look around and see what you own that can be made into a container that you may not have thought of.

They also suggest that the in the case of the teapot, the flowers should be the same size as the pot and not cover the brim. This means a lower and smaller arrangement than most traditional florists would create, but it’s amazingly balanced and tranquil.

There’s also a rustic simplicity to Ikebana. The example below is a picture I took from the book. I’ve seen pieces like this before but never really stopped to think of how they might be created. Thankfully the book shows you what’s behind the look and how this clematis and rusted iron pipe arrangement was made.

From “Japanese Ikebana For Every Season” – Rusted Pipe with Clematis

The pipe could be mounted to the wall and the flower changed out as need be since a glass tube is inserted to hold water for the flower. What a simple idea that would look fabulous on a table as well.

I think the most interesting thing I read was about using stems and leaves instead of all flowers in multiple vase arrangements. The look is unusual and not expected so it makes you stop and really look at the arrangement. It’s something I’ll be doing this soon for sure.

Entering the World of Ikebana

There are fifty three arrangements in the book to get anyone ready to create their own Ikebana florals.  That’s what the author’s intended. They want to get our creative thought process going and use their examples as a way to get started. But beyond arrangement flowers, the book features so many great ideas and thoughts about life really. Growing, decay, rebirth, and more.  It’s beautifully written and so enjoyable to read.

From “Japenses Ikebana For Every Season” – Cottage of Cozy Colors

I was so inspired but the book that I wanted to create a few pieces. Sadly, there isn’t a single blooming thing in my yard and anything that was is now wilted because of the rain. I couldn’t even find a great stick or leaf to drape because it’s all pine trees right now. But rest assured, as soon as the landscape figures out it’s spring, I’m going to get out there and create a few things from the book. I already know I’ll be using several of the techniques on all of my arrangements from now on like the natural support. Such a great idea.

Have you tried Ikebana?

Japanese Ikebana for Every Season Details 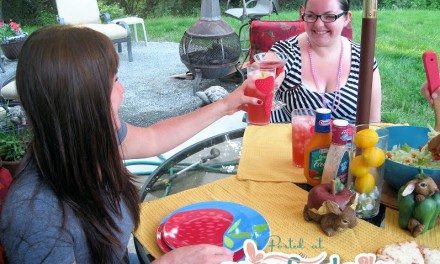 Organic Chemical Free Gardening Is Easy And Makes A Difference

Gardening: Grow a Love of Nature – Gardening With Kids

Organize 2014 With A New Planner