I realized today it’s been almost 10 years since I’ve been to New York on vacation.  Sure, I’ve been there once since then, but it was for a very quick press trip, so I don’t count that visit. But back in July of 2004, we went there to celebrate my oldest son’s graduation from High School.

During our one week we were there, we saw eight Broadway shows. It was one of the best trips I’ve ever taken and so many wonderful memories were made on that trip.
We stayed right on Broadway and took every chance we had to see a show. We didn’t pre-purchase any of our tickets and we did the daily ticket raffle for many of them. The beauty of doing it this way is that you get a chance to see shows you might otherwise have overlooked.

We saw “Wicked” with its original cast, “Fiddler on the Roof” with then child and now star of Glee Lea Michelle. We saw “Assassins” with Neil Patrick Harris. He was phenomenal in the show and was so kind to pose for pictures and autograph the Playbill afterwards.

We also suffered through “Frogs” which was truly horrendous, but it gave my son a chance to meet his Broadway idol, Nathan Lane, in person and a chance for a photo and autograph.

It also gave him and my niece a chance for a goofy photo with  Chris Kattan who was very big back then on Saturday Night Live. I’ll never forget sitting in the theatre, so close I could see spit flying from his lips, and thinking that this show was worse than any Jr High play I’d ever seen. It folded shortly after and is the one flop we wasted full price tickets on. 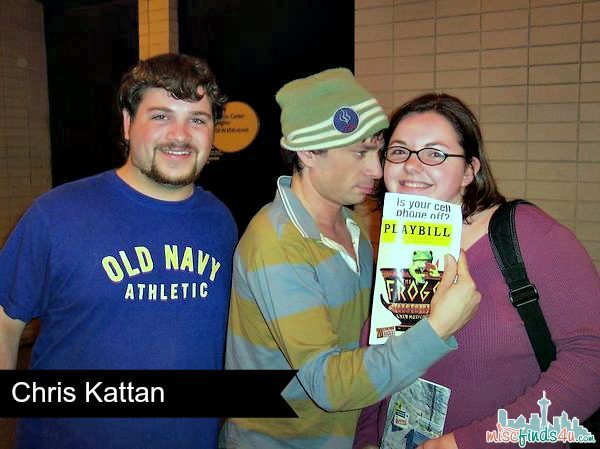 An interactive Timeline of Major Broadway Musicals by Marriott

All of these experiences we once-in-a-lifetime and only available on Broadway. Make sure that the hotel you choose provides the same experience. There are over 3800 Marriot International hotels in over 74 countries and territories around the world and there’s one on Broadway in New York City.

Want to find out more about the shows we saw? Check out this interactive timeline and find information on shows from 1937 to 2013.

Take Me Back to Broadway

I will make it back to Broadway some day and I will do it exactly the same way we did in 2004. Sure, we visited the Statue of Liberty, Wall Street, Raspberry Fields in Central Park, and other tourist destinations, but the streets of Broadway are what we loved the most.

Our hotel overlooked Times Square and we lived it 24/7. We even got a surprise of being able to see the 4th  of July fireworks from our room. The only thing stopping me from enjoying Broadway more often is the cost of airfare from Seattle to NYC.

Broadway is this theatre nerds nirvana destination, what’s yours?

I was selected for this opportunity by Clever Girls Collective, however all content and opinions expressed here are my own.

Where to Stay on Cannery Row: Monterey Bay Inn, CA