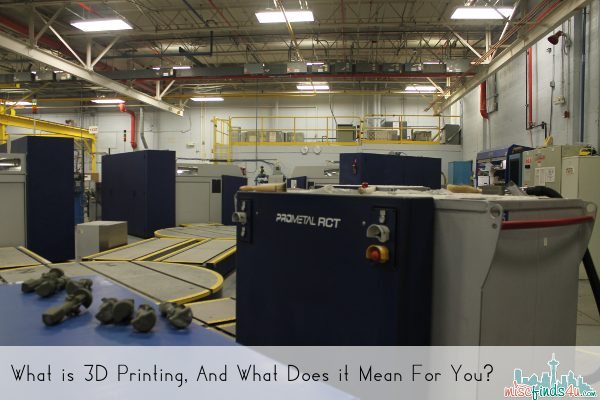 Travel, accommodations, and other consideration provided by Ford; all opinions are my own. #FordIn2014

What is 3D Printing?

During my trip to Dearborn, Michigan last week, I had the opportunity to hear what Ford Motors has in store for 2014 at their annual news briefing. After we got a peek at Ford’s plan for the new year, we were invited to choose one of five breakout sessions for a close-up look at everything from Ford’s historical archives to new technologies. I chose to attend their panel on 3D printing, and I’m so glad I did: It was an absolutely fascinating, one-of-a-kind opportunity to see this amazing technology at work in an industrial setting. We visited the Beech Daly Technical Center to speak with their technical specialists, watch their machines in action, and get our hands dirty.

Ford: What is 3D Printing?

So what is 3D printing, exactly? To start off our tour, we watched the following video that gives a brief introduction of 3D printing:

One of the press in attendance asked the technologists to “Explain it like I’m five”, and they provided us with this analogy: Imagine a styrofoam cup that is cut into slices. If you were to glue each ring of styrofoam together, the layers would slowly build up until it once again resembled a cup. This example gives you a starting point to imagine how 3D printing, also known as additive manufacturing, builds layers to create parts and products. Another way to visualize it is to picture a spool of CDs being stacked.

After a brief introduction, we were taken on a tour of the facility to watch the Ford’s 3D printers in action. Our first stop was observing a part being printed with nylon powder using SLS (Selective laser sintering), which is a form of 3D printing that utilizes a lazer to fuse each layer of powder together. When the part is finished, it is surrounded by loose powder, so the part is pulled out and dusted off with a brush. Alternatively, plastic parts can be built using a liquid process called SLA (Stereolithography), which we also observed at the Center.

Time To Get My Hands Dirty!

We were invited to snap on some safety goggles and rubber gloves so that we could try our hand at removing the parts printed using SLS from the powder! It’s a little like digging something out of a sandbox, but with much finer powder.

Look What I Found!

Here is the cap which I “Dug out”. The photo is a tad blurry because it’s hard to focus your camera when your hands are covered in powder. 😉

Once the part has been brushed, it is put through another machine for its final cleaning. The loose powder that is left over from the process is then used in a 50/50 mix with new powder and run through the machine to make a new part. Once our caps came out of the machine, we were given them as souvenirs!

Next, we were led to the area where 3D printing with sand takes place – this is where sand cast molds for prototype engine parts are created. Ford actually helped with the development of the 3D sand printing technique by funding research on it. Sand cast molds allow the creation of workable prototypes at a fraction of the cost and time from traditional molds. For example, if an engineer creates a computer model of an intake manifold, they will wait around 4 months for one standard prototype, which will cost $500,000. Using 3D printing, this same part can be made in 4 days for $3,000.

Once again, we were given the chance to get involved, this time removing finished parts from the loose sand which surrounded them.

Here I am digging in the “Sandbox”!

3D Printing in Action at The Beech Daly Technical Center

After our hands-on experience, we were shown several display vehicles which contained parts created with 3D printing. They left these parts unpainted so that we could identify them easily – otherwise, you’d never know the difference.

At the end of the tour, we were presented with cell phone holders which Beech Daly Technical Center made for us in one of their machines! I thought this was seriously neat – what an awesome memento of my time there!

What 3D Printing Means For Consumers

Advances in 3D printing have significant implications for the development of new technologies, because they provide a new freedom to engineers. Those who are creating prototypes now have less limitations in budget and time, which gives them the freedom to experiment more with new ideas and test out further improvements for existing products. Ford is unveiling 23 new vehicles next year, which is a clear example of what you can achieve when production times for prototypes are sped up.

This tour was a truly unique experience – how many times in my life will I be able to say that I got a chance to literally get my hands into the industrial 3D printing process? It was fascinating, fun, and I truly appreciated getting this glimpse into the facility and its work. Thanks to everyone at the Beech Daly Technical Center for being so welcoming and sharing their work with us!

Simplicam By Closelli: What We Love and Where it Falls Short