Follow Laura’s journey after gastric sleeve surgery in 2013 (the start of her journey – Weight Loss Surgery: A New Beginning For ME)

The End of My Old Way of Eating

July 22nd was the date  my pre-surgical diet was scheduled to begin. This restricted diet was to consist of three protein drinks a day ( each with less than 5 grams of sugar and fewer than 200 calories), 1 cup of raw or cooked vegetables, and a Lean Cuisine frozen meal of my choice.  I was scared and stressed out about maintaining this diet for two weeks.  How could anyone live on such a small amount of real food and be expected to maintain a normal life?

I wasn’t sure how I would handle it so I opted to take a mini-vacation during my first week of my diet which proved to be a blessing and a curse. I planned ahead and bought my protein shakes at my local Costco. The Premier brand were my favorite as they had 30 grams of protein, were low sugar, and were within my calorie allowance.  I planned to start my two week pre-surgical diet on the 22nd of July because I had big plans for the 19th-21st and I didn’t want to have to worry about food or alcohol which is a big no-no for awhile after surgery.

July 19th: I left work and my sister picked up my husband and me so we could head to the Paul McCartney concert in Seattle.  I had a few beers and on a night filled with some of my favorite songs, I found myself incredibly emotional.  The concert was amazing and I am so happy that I started my last “real” food weekend in style.

July 20th:  My parents were hosting a Hawaiian Luau for my grandparents 60th Wedding Anniversary which was the highlight of the year.  We had catered Hawaiian food, good music, lively bar tenders – my beautiful sister and our new friend Jared – and lots of out-of-town family members.  My husband and I had decided earlier that neither of us wanted to drive home so we ended up camping in the backyard which gave us a no holds restriction to food and drinks.  We had a blast and I am so happy to have been witness to such a wonderful occasion. Sixty years of marriage is a huge accomplishment and something that truly needed to be celebrated.

July 21st: My 28th Birthday.  I celebrated the entire weekend so having a party for me was not at the top of my priority list.  We settled for my in-laws coming to my house and hanging out for dinner which ended up being my last real big meal.  I had a steak, baked potato, and my mother-in-law made a pasta salad with a blueberry lemon cake for desert.  I’m not going to lie, I ate more then I should have because the next morning I had to get serious about food.  I went to bed that night with the knowledge that the next day would have challenges for me.

July 22nd : Diet day one – I started my day by getting ready for a normal day at work.  I start late in the morning and I usually eat my first meal sitting at my desk which on this day consisted of a protein drink.  A few hours later I had lunch which was… a protein drink.  By this time I was feeling extremely light headed and shaky.  I had only consumed roughly 300 calories and I was really feeling the burn.  Around 6pm I took my last work break and had my final protein drink.  I clocked out from work at 7:45pm and drove home feeling sick as a dog.  I was so sick to my stomach I didn’t know what to do so I medicated myself with Tylenol and found the baby carrots in the fridge.  I munched about a cup of them and dug through my freezer to select the night’s Lean Cuisine.  I went to bed that night feeling exhausted, deprived, and a little defeated.  How would I handle restricted eating after surgery if I couldn’t do one day with a controlled diet?

July 23rd:  Day two was a similar experience but I had plans for a vacation starting on the 24th.  Apparently my body had plans as well because my menstrual cycle decided to start which added extra stress and frustration to my pre-surgery diet.

July 24th: Day three – I drove with my parents to Whidbey Island. While my parents and grandparents enjoyed dinner, I enjoyed a Lean Cuisine. The next morning we were off to the San Juan Islands.

Vacationing on a Restricted Diet

July 25th:  Day four – I noticed my food cravings were lessening and I wasn’t feeling quite as sick as I had earlier in the week.  We arrived on the island where I rested and relaxed for the next few days.

The time on the island was amazing but it did offer its challenges, I was on an extremely reduced diet and my energy levels were dropping at alarming rates.  We went on some walks and explored most of the island, but each day I would end up overdoing it and pass out when we got back home.  My dad kept asking me if I was okay or if I needed to eat food, it was strange for him to see me feeling so weak and lethargic which was sweet.  I kept reassuring him that I was fine and I would nap when we got back home.

By the third day on the island I noticed I was starting to feel better, I was able to make breakfast for the family while not eating anything but a protein shake.  We went whale watching and we ate out at a few local restaurants.  I know you’re reading that last sentence and thinking I wasn’t able to eat anything but my shakes and a Lean Cuisine meals.  I was tempted a few times to break the rules, but when we ate out I ended up getting a side salad without salad dressing, which I counted as my veggies for the day.  It was getting easier and I felt good about my decisions.

That Sunday my husband and I left San Juan Island for home. I was having a major panic attack about the whole process and surgery. As a result, things that normally wouldn’t bother me became a huge issue – you might say I turned into the Wicked Witch that day – I really went off the deep end.

By the time I got home I had cooled off and I was getting ready to start my last week of work before my surgery. That week was really uneventful but full of some surprising information.  I had coworkers approach me telling me I looked really good, a few of my closest friends knew what was going on and they pointed out that I was looking amazing for only dieting for two weeks.  That week was really uneventful and I was looking forward to Monday August 5th for my 5:00am check-in at the hospital.

The Night Before Weight Loss Surgery

The night before surgery my husband asked me if I was scared. I told him I was more afraid of going through Infertility treatments than having the weight loss surgery.  He didn’t understand my response and I am going to take a minute to clarify.  I knew that weight loss surgery worked as long as I followed the rules, with infertility treatments even if you follow the rules you are not guaranteed anything.  This conversation ended with me telling him I love him and a peaceful night’s sleep.

I thought I’d mention a bit about the different types of surgery available and tell you why I chose the method I did for myself. There are generally three typical surgery methods: Gastric Bypass, Gastric Banding (Lap Band), and Vertical Gastric Sleeve.

I had opted for the Vertical Gastric Sleeve surgery, it’s a newer process and it didn’t involve a foreign device implanted in my body and I didn’t need to have my intestines rerouted. It seemed like a win/win for me and with my plans for parenthood on the horizon, my surgeon though it would be the best for when I need to gain weight for a pregnancy.

Stay tuned for my first few days at home as well as updates on my current progress! And I’d love to hear from you if you’ve undergone surgery or are thinking of it.

Read more of Laura’s journey with gastric sleeve surgery and an update!

Weight Loss Surgery: A New Beginning For ME 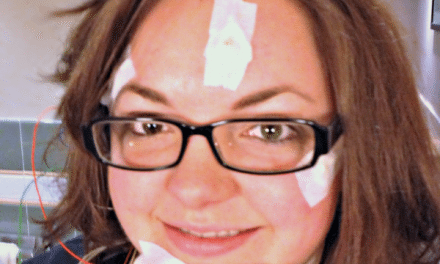 Weight Loss Surgery: A New Beginning For ME

Three Ways to Make a Healthy Change in your Daily Activity

How To Exercise at Work Sweat-free With These Four Tips