I received a T-fal OptiGrill to facilitate this review; all opinions are my own.

My husband has been told that his decades long love affair with red meat is over. His cholesterol and blood pressure are much too high, especially for someone so fit and lean. He used to eat steak 3-4 times a week and would have eaten it at every meal if I’d have allowed it. But going cold turkey isn’t easy and moving to a healthier diet is a work in progress. One way I’m helping him make this transition is by feeding him more fish and chicken, but since I’m not a fan of the outdoor grill because of the electronic start which I’m convinced is out to get me, I needed another way to prepare his meat.

That’s where the T-fal OptiGrill comes in handy. It gives me the ability to grill his meat without having to stand out in freezing temperatures or the Seattle rain. I can cook his food right on the kitchen counter without any hassle.

Cooking on the OptiGrill

Cooking meat on the OptiGrill couldn’t be easier. Just turn on the unit, select the type of food you’re cooking from the six automatic cooking programs (one for every major meat group and a manual option for fruits and veggies) then press start. The tabletop grill preheats and then notifies you via beeping tones as well as colored lights that it’s in the process of preheating. As soon as the grill is ready, the colored light changes and you simply place your protein on the grill.

Next just close the grill and let the cooking process take place. The grill beeps as it advances from rare to well done and the colored light changes as well. The meat is meant to be eaten right of the grill. If you like to let your meat rest, take it off one level sooner.

Does the OptiGrill work?

In one word, YES! The steak was cooked to perfection without any help from me. My husband likes his meat well done and while looking at it we would have left it on longer, I’m glad we didn’t. Once off the grill and sliced open, we found it to be exactly well done. No wonder hubby ruins so many good steaks on the grill – he waits until they’re well done on the outside – yikes, so much wasted meat over the years!

We also grilled white asparagus on the grill after first spraying it with organic olive oil spray and shaking a no-salt seasoning mix on it. In the “M” mode it grilled in about 5 minutes. I did have some issues with the asparagus rolling off the grill and into the drip pan, but I’m sure there’s a way to prevent that. I just need to do some more experimenting.

What I Love about the T-fal OptiGrill

What I love about T-fal OptiGrill is that everything I’ve cooked on it has been perfect! It cooks evenly on both sides at the same time so cooking time is cut drastically and it cooks from frozen! It somehow senses the thickness of your meat and regulates the temperature. Plus there’s no worry about running out of propane in the middle of cooking (I swear it happens to my husband every time with our outdoor grill).

We’ve used it four times this week – first the steak and asparagus, the next night marinated skinless/boneless chicken thighs (below), and just yesterday I took three chicken breasts and within about 7 minutes, I had BBQ chicken for hubby’s dinner and lunch the next day! I simply set it to chicken, waited until it beeped to tell me it was halfway done, brushed it with BBQ sauce, and then let it finish cooking. It was perfect and so fast! (sorry, evidently I was so excited about how fabulous the chicken looked I didn’t snap a photo). But I didn’t just take its word that it was done,  I always verify the doneness of chicken, pork, and other meats with a thermometer .

I’ll admit I was worried the indoor grill would set off one of our many smoke detectors. Thankfully that hasn’t happened. Not even when BBQ sauce and other potential smoke inducing ingredients were added. That’s pretty impressive. I was also worried it would squeeze out the juices and make the meat dry – that’s not the case at all. The top rests gently on the top of the meat and everything has been moist and juicy.

Cooking with the OptiGrill is going to help me improve my husband’s diet and my own as well. I’m a vegetarian and eat faux meat quite often. The OptiGrill will allow me to heat and eat them without heating up the oven!

Clean up is easy – unclip the cooking trays and collector tray and wipe them down or pop them in the dishwasher and you’re done!

I’m not the only one who loves the OptiGrill. Check out the Good Housekeeping review.

I’m looking forward to seeing what else I can do with the OptiGrill. Have you ever used one? Do you have any tips for me? 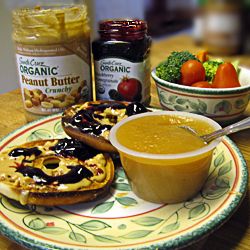 Send Your Kids to School with Homemade, Healthy, and Organic Brown Bag Lunches