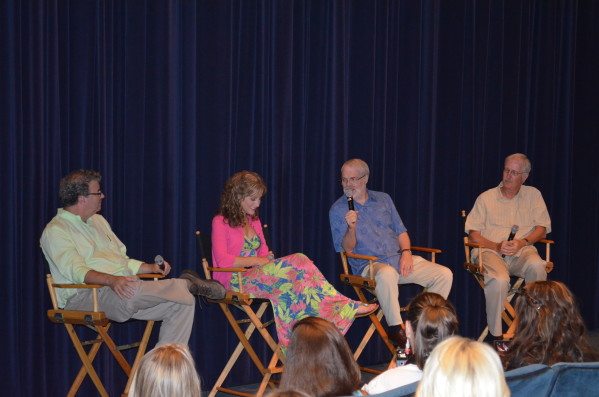 Disney provided airfare, accommodations, and the opportunity interview Jody Benson.  All opinions are my own.

Jodi Benson has done a lot of things in her career, but many would say her defining moment was when she was cast as the voice of Ariel in “The Little Mermaid.” It turns out, Benson agrees.

I got the chance to chat with Benson  in July on a beautiful day in sunny Southern California at the Walt Disney Studios. I was there for a press event that included the promotion for the Diamond edition release of “The Little Mermaid.” (read: Little Mermaid with Musker & Clements and  Disney Store Exclusives: Little Mermaid).

Jodi Benson: On “Being” Ariel and her Legacy

The first thing I noticed about Benson is she’s very soft-spoken, impeccably though casually dressed, has flawless and nearly wrinkle free skin, and she’s deeply religious. She spoke often of her gratitude in being handed the part and all the doors it’s opened for her since.

Not that she’s taken advantage of all of them. She decided that her family would come first and she’s been mostly wife and mother for the last 30 years. But she’s not complaining, she feels she’s found her true love in her husband and she still sings, only now her family is her biggest audience.

Still she’s keenly aware the film shaped many childhoods and especially how some young girls, now women, felt about themselves. Ariel wasn’t the typical princess. She had a temper. She had dreams. And she had a stubborn streak.

But the film appealed to more than just young girls. It’s a family film, albeit with some bone chilling villains. All these years later a new generation is falling in love with the red-headed and wild princess.

You’d think that after decades of singing the same songs Benson would be tired of them. Exactly the opposite. She feels like every time is fresh and new. In fact, with just the tiniest bit of prompting she belted out several bars of “Part of Your World.” Let me tell you she brought that room full of mostly 20-30’s women to tears. It was magical.

Jodi Benson a cappella ‘Part of Your World’

Benson is also the voice of Barbie in “Toy Story” and does five other ongoing Disney characters. Voice work lets her work around her family’s schedule. What are her plans for the future? Continuing voice work and who knows. Now that her family has grown we may just see her again.