Disney has provided airfare and accommodations and the opportunity to discuss “The Little Mermaid” with John Musker and Ron Clements.  All opinions are my own. 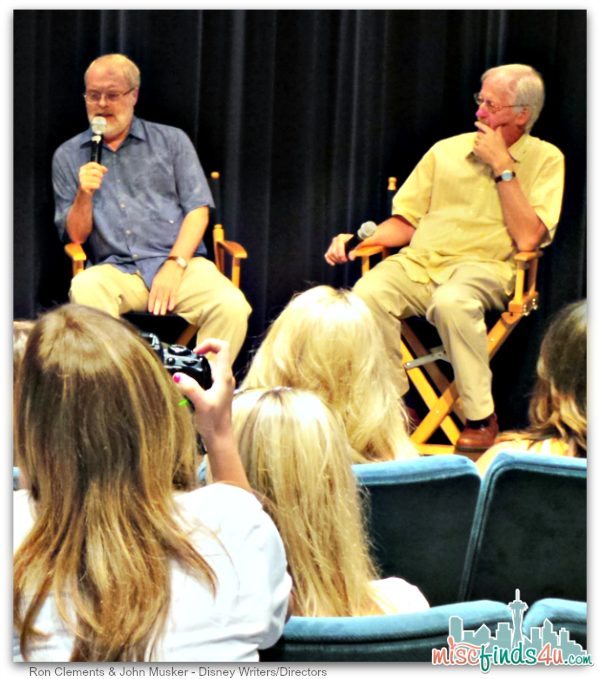 A few months ago I got the pleasure of sitting down with John Musker and Ron Clements, the talented writer/director duo to talk about character development for “The Little Mermaid.”  Let me tell you first that these two are so comfortable with each other that the often finish the others sentence. In fact, they’ve taken on a work-wife role with each other for the last 33 years or so.

Their ease with each other and the rolling and rambling way that they work together as a team is certainly fun to watch. They talked about how they each directed different songs from the movie and how it became a competitive in a very friendly way.

In fact, the characters and their personalities were formed in much the same communal spirit. They smile as they talk about Sebastian, undoubtedly one of the most beloved characters from the film, and how in the original treatment which Ron Clements wrote he was actually a British major domo type named Clarence. Thankfully, Howard Ashburn stepped up to say that he was interested in working on the film and he had the idea that the crab should be a Rastafarian. To which Clements lamented, “Our crab is going to become a Jamaican?”

Of course this revelation had me do a double take. Would the film had been as fun and delightful with a stuffy old crab named Clarence?!? Definitely not! Thankfully Ashburn’s premise of having the crab come from a land where Calypso music and Reggae reign left us with a bold and cool crab, much like the then popular Seven-Up commercial actor, Geoffrey Holder who was wildly popular at the time.

In fact, the Calypso-style of music came to embody the sound of “The Little Mermaid” and set the stage for all of Ariel’s undersea adventures. Ariel herself was written to be more active than traditional princesses. The duo purposely worked to make her more human – she gets mad and takes charge. But her character wasn’t always written that way. In an earlier version of the script, Ariel was more reserved and a bit shy. They based that version off of the character Laura from “The Glass Menagerie.” But they soon realized they wanted someone stronger and to do that, they ditched a dolphin character which in early drafts of the film was rambunctious and very take charge. They envisioned Robin Williams in the part, but the character was axed due to too many characters, and the dolphin’s character traits were reassigned to Ariel in an attempt to make her more engaging. It worked.

“The Little Mermaid” is definitely a gift from this talented and fun duo. It’s obvious how much they love the story, the characters, and the voice actors. They’ve done many more projects but this one holds a place near to their heart and mine.

The Little Mermaid Diamond Edition is available for pre-order on DisneyStore.com.  The 2-Disc Combo Pack comes with an exclusive set of 4 10″x14″ Lithographs (while supplies last), plus $20 off a future online purchase of $40.00 or more; or $10 off a future online purchase of up to $39.99. See the DisneyStore.com website for complete details and to order.