I received a sample of Nonni’s THINaddictives to facilitate this review – all opinions are my own. 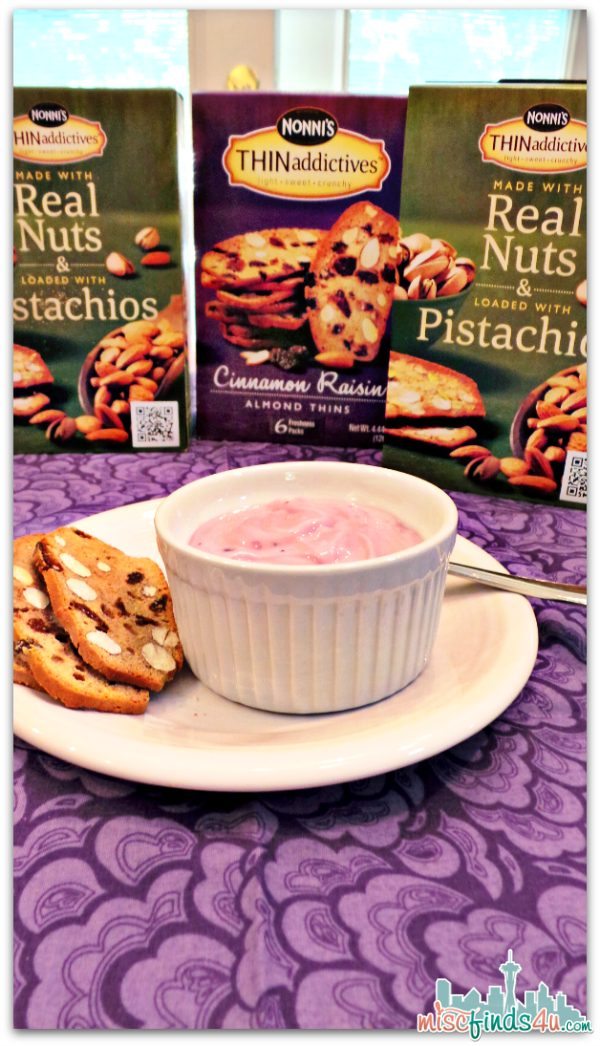 I have been a Nonni’s Biscotti fan since the first bite. When they came out with their THINaddictives, I jumped on the chance to taste test them. These new cookies are just 100 calories a pack. They’re so delicious they’re worth every calorie!

Even better, these crunchy treats are made with wholesome ingredients including California almonds, pistachios, cranberries and cinnamon swirls. The combination of crunch and sweetness is pure perfection.

The almond biscotti cookies are filled with fruit and nuts. The three flavor combinations are Pistachio Almond, Cranberry Almond, and Cinnamon Raisin. Each box contains 6 packages and in each package are 3 very thin cookies.

I didn’t think the Pistachio Almond flavor would be my thing so I set them aside. We devoured the Cranberry Almond (so fast I didn’t even get a chance to take a photo). We also love the Cinnamon Raisin, though the raisin’s moisture did tend to make these cookies less crunchy – still fabulous – but with a different texture than its counterparts.

As we neared the end of the other two flavors I decided to give the Pistachio Almond a chance. Uh, YUM! The flavors marry beautifully into a crunchy bit of sweetness that’s not too sweet.

I enjoy my Nonni’s THINaddictives with yogurt as an afternoon snack and I’ve been known to have a pack at night before bedtime. My dogs have figured out the rustle of the packaging and they come running. My very picky eaters LOVE these Nonni’s cookies so I have to hide them from them – it’s like having toddlers in the house again!

Nonni’s THINaddictives sell for about $3.29 for a box of six

Nonni’s wants to help you lead a healthier lifestyle – follow them on social media for hints, tips and giveaways!