La received a 3D Blu-ray of Disney’s Oz The Great and Powerful to facilitate this review. All opinions are her own.

Disney’s Oz The Great and Powerful was a very magical experience. I waited to watch this film on 3D Blu-ray because we have been on a budget which means we’ve been picking and choosing wisely the movies we want to see in theaters. After watching the film, I wish now that I would have splurged and enjoyed it on the big screen and made a day of it with my nieces and nephews. It’s a great movie for kids and I would have love to have shared it with them!

The acting is flamboyant and enthusiastic almost as if you were watching a play. This flamboyancy is continued in the brilliant colors that come to life after James Franco’s character enters Oz. In fact, the whole movie is beautiful to look at. Add to that the 3D, and everything seems to pop the entire length of the film. It’s obvious this movie was filmed in 3D and not just converted – it’s done beautifully and the 3D adds to the magical experience.

While I enjoyed the home 3D version, I would have loved to see it with some young children. The joy of experiencing the awe and wonder in a child’s face while they watched this movie would have made it even more rewarding. Especially since The Wizard of Oz was released decades ago, many of today’s children may not have seen the original film, so this is likely their first step into the magical world of Oz.

Free Oz the Great and Powerful Activities and Printables 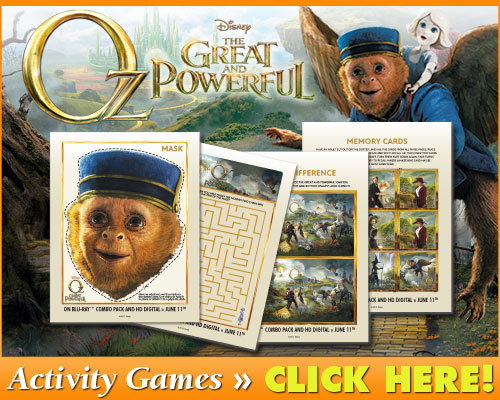 It was also very cool to watch and learn how it is that Oz came to be – the prequel to the story as it were. We find out what makes the wicked witch, wicked among other things which really adds depth to the original story.

If you’re a fan of

‹ ›
, I think you will enjoy the addition to the story that