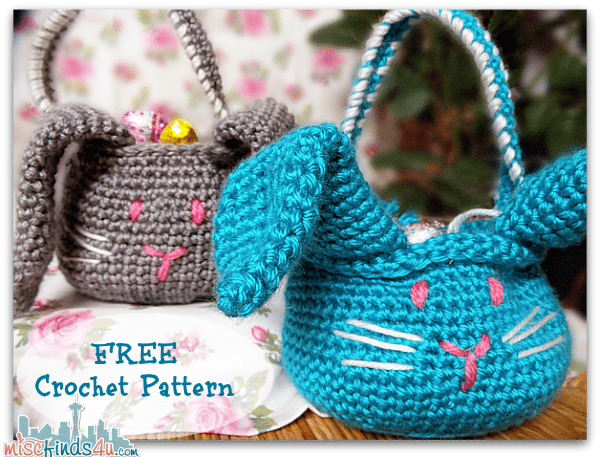 I made these two sweet little bunnies from a free Amigurumi Bunny Basket crochet pattern provided by Jo-Ann Fabric and Craft Store. I used the pattern but made a few changes. Their version is below.

For my first version, I used Caron Simply Soft Brites Yarn (H9700B) Blue Mint and crochet hook size H-8. Because the yarn is much finer and I crochet tightly, my basket is approximately 6” x 8” high. I used almost 2 oz of the mint and just a small amount of white and pink Lion Brand Yarn 601-610 Bonbons Yarn, Brights for the features.

I slip stitched the first row on the handle to give it some body with the blue mint before tying off and then I did a decorative whipstitch with a needle with a double strand of white yarn to give it, even more, body and highlight it. If I ever use this same yarn again, I’ll use crochet with two strands at the same time for the handle.

I also slip stitched the basket opening of the gray bunny in the same color to make it sturdier, but it could certainly be done in a contrasting color or with a decorative needle stitch instead. I love the way it looks.

I added just a bit of loose quilting batting to the base of the ears of the blue bunny to help his ears stand up, keeping it low so that the ears could still be turned down. The eyes were done with a doubled strand of pink from this set of Lion Brand Yarn 601-610 Bonbons Yarn, Brights, which I did in place three times to build up the depth of them.  The whiskers were sewn in white as well.

After seeing my first attempt, my mother requested I make on for her. Hers was made with leftover Simply Soft Caron yarn in Gray Heather from my last granny square afghan project. That yarn has a lot more body even though it’s the same brand and weight as the blue mint, so the handle stands up nicely. I chose to whip stitch it in white anyway as well to mimic Easter Baskets from my childhood in the 1960’s. I left the ears floppy on this one – it just looked cuter as a floppy eared bunny.

Both bunnies are finished with Pom Pom yarn tails made with a  Clover Large Pom Pom Maker. The gray has a gray and white tail that looks pretty adorable while the blue mint’s tail is solid.

Crochet How To: Row Markers

I used a lot of row markers on my first try. It was much easier than I thought it’d be!

This was my first attempt at a 3D animal (amigurumi), so I used row markers…lots of them on the first ear. My crochet how to hadn’t previously included Amigurumi (the Japanese art of crocheting or knitting small animals), and now I’m hooked. By the time I did the second, I felt comfortable enough to use a piece of contrasting yarn to mark the rows instead. That would have been great, but I accidently pulled it out. Now I anchor the yarn with a Clover Large Pom Pom Maker, so there’s no worry about losing it.

Yes, I’ve been making more bunny baskets! This one was made with Premier Yarns 1-Pack Solid Deborah Norville Everyday Soft Worsted, in Aubergine with a hook one size larger (crochet hook size I) for the body than the pattern calls for. To keep the handle small enough to stand up and the ears not too long (I prefer them floppy), I used the crochet hook size H-8 called for in the pattern.

I finished the body with a crab stitch (reverse single crochet) as well as both sides of the handle. I did the face in the same pink Lion Brand Yarn 601-610 Bonbons Yarn, Brights and finished with some leftover white. I toyed with adding some additional detail to the handle in a coordinating color and tried two different embroidery stitches, but in the end, I liked the look of the crab stitch on its own.

My Next Crochet Project

I’m going to make this with a bigger hook and with bulky yarn later this week. These are too small for Easter Egg hunts, and I’d love a bigger one that can hold eggs.  Then it’s back to making hats for charity. I have seven ready to donate plus I’m almost finished with my Project Linus blanket. 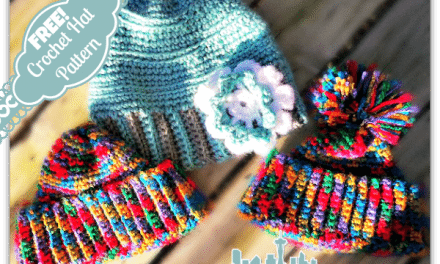 How to Crochet: Free Hat Pattern and Variations