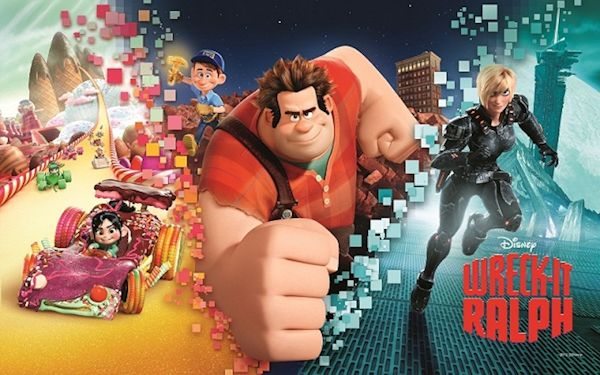 Disney • Pixar scored a hit with their retro fun Wreck-It Ralph which arrives on home video on March 5, 2013 . This game-centric animated film is sure to put a pang into the heart of anyone from the 80s who grew up during the time when games were played in arcades and coins were used to get your 2 minutes of play time with your favorite characters.

Those of you who’ve grown up on the HD-home gaming systems will still enjoy the film because the characters are engaging and lovable  The story is heartwarming and the animation impressive. The film is packed with video game cameos as well as Easter Eggs – it’s a film you’ll watch again just to see what you’ve missed.

The [amazon_link id=”B00A7OJ0DC” target=”_blank” container=”” container_class=”” ]Wreck-It Ralph[/amazon_link] voice cast is a season group of acting veterans who bring these unique characters to life. John C. Reilly (Chicago) plays Ralph the bad guy who’d rather be a good guy, Sarah Silverman (The Sarah Silverman Project) is Vanellope his love interest, and Jack McBrayer (30 Rock) brilliantly plays the goody-two-shoes Felix. The cast is rounded out by Jane Lynch (Glee) as Calhoun and Alan Tudyk as King Candy.

The film has a strong message for viewers and the 3D is done well. Nothing memorable; but nothing distracting either. I could have gone either way with this film.  Because of cartoon violence and suggestive language, I wouldn’t recommend the film for younger children and with its PG rating, it’s appropriately rated. I find it geared for the 7-25 year old market and those in that range will likely love it.