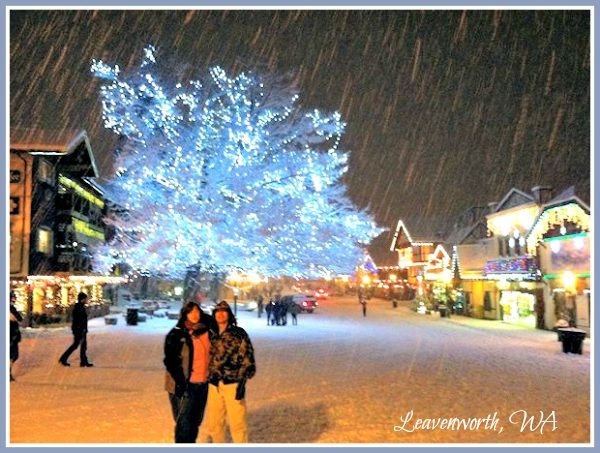 The Hubby was warm and toasty – I was freezing! Leavenworth, WA 2012

My husband is a bit of a long underwear snob. He thinks that you have to spend a lot of money to get a quality base layer and so for years I’ve seen him pay $100 for a top and bottom. I’ve never complained because he works full-time plus he owns his own business where he works outside or in unheated homes, so he deserves to be both warm and comfortable.

I recently had a chance to have him try an affordable set of thermal underwear, but because I know about his bias for an expensive brand he’s worn for years, I didn’t tell him these weren’t pricy. I asked him to try out a Watson’s Performance Layer top and bottom in navy. I chose navy so he can wear it under his firefighter uniform if he needs to (although he has a fire-resistant set he generally wears on duty).

I happened to give them to him while we were visiting Leavenworth, WA a few weeks ago. While we were there it snowed 14” and we couldn’t have been more excited. The hubby wore the Watson’s Performance Base Layer and was thoroughly impressed by the quality, the fit, and the warmth. After he rated them an A+, I let him know that they were only $19.99 each! That’s $60 less than his favorite brand.

He’s now a convert and we’ll be buying a few additional pieces as he wears long underwear daily and just about year round. He loves the blend on these which is 85% micro polyester and 15% spandex so they’re super comfortable and the move with him.

I love that they have an antimicrobial treatment to control the growth of bacteria so no matter how hard he sweats in them, he doesn’t stink. Plus the fabric wicks the moisture away from his skin so he keeps dry and warm and that’s important to me.

The sizing was perfect – I used the sizing guide on the website and they fit perfectly. Shopping the site was easy and while I was there I noticed they sell mens, womens and childrens base layers in different fabrics including cotton blends, waffle, bamboo, and more.

Watson’s can be found at discount chains, upscale department stores, and online.

Mikarose Dresses – Affordable, Stylish, Modest in Sizes from 0 to 2x

Holiday Sweaters and Accessories with an Edge by Tipsy Elves