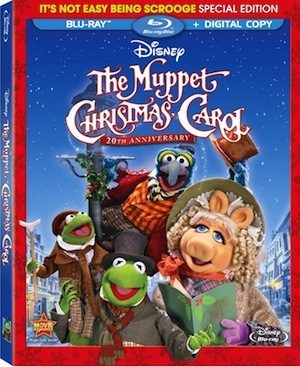 Ladies and gentlemen! Have you heard the news? One of the greatest Christmas classics is back and better than ever! The Muppet Christmas Carol 20th Anniversary Edition has been released on Blu-ray just in time for the holiday season.

This was one of my favorite Christmas movies to watch when I was growing up. It has so much heart, heaps of comedy and to top it off, the lead actor is none other than the incomparable Michael Caine. Now I am assuming that most of you have seen this movie at some point in your life, so rather than tell you how good this movie is I will show you what this edition in particular offers.

First of all, the picture and sound quality that comes from Blu-ray playback is second to none, this film really comes to life in high definition. In addition to this, the 20th anniversary edition includes special features including the hilarious blooper reel and a comprehensive and in-depth behind the scenes featurette “Frogs, Pigs, And Humbug: Unwrapping a Holiday Classic.”

My favorite feature however, is the audio commentary that includes behinds the scenes information from the main characters themselves. Kermit, Rizzo, and Gonzo all comment on the movie while you watch it, it is absolutely hilarious!

If you are looking for a movie to compliment your holiday cheer, this is the one for you. Clean family fun with a lively puppet cast, it doesn’t get any better than this!