Seattle Windows 8 and UrbanSpoon Lunch with Chef Rauturea at Luc

I participated in a great event here in Seattle yesterday at Luc, the French-American Restaurant owned by Top Chef Judge and Top Chef Master Contestant, Thierry Rautureau. The event was sponsored by Microsoft Windows 8 and The Urban Spoon and gave prominent bloggers in the Pacific Northwest a chance to speak with the chef and sample a fabulous French-inspired lunch which started with colorful cocktails and oysters on the half shell.

While we dined on a fabulous amuse-bouche, we heard from Chef Rautureau about his experiences on the Bravo TV show as well as how he began his career at the age of 14 in food because his mother thought that working in a restaurant would be a good way to be sure he’d always have food in his belly and a roof over his head. Ratureau came to the US as a young man and has never moved back to his native France. He work in Chicago and decided the cold winters were not for him. After spending a few years in California he settled here in Seattle where he’s been a fixture for the last 25 years. His first restaurant is Rovers which he’s owned since the 1980s. Luc was acquired in 2010.

While the animated Rautureau spoke about the name of Luc, he motioned to a portrait behind him and shared that the restaurant was named after his father, Luc Rauturea. An audible…..”ahhhh”….came from the table of mostly women and the younger Rautureau smiled and appeared to enjoy the moment. He also captured the table when he spoke about his time competing on Top Chef Masters: Seasons 2 and 4 as well as judging in Top Chef Seattle. Beyond being enamored by host Padma Lakshmi’s beauty, his most amazing experience with the franchise was cooking at the rim of the Grand Canyon; an experience he said that everyone should experience because of its grandeur.

We also learned about a fabulous and free app called the UrbanSpoon which connects users with good food in any location around the world. Simply allow the app to access your location and you’ll be given options for food nearby along with user reviews and photos, guides, and more. Many of the restaurants have hours listed, menus (in PDF format), and critic reviews. In fact, you can even make some dinner reservations right from the app. The UrbanSpoon is available for your PC or Mobile device.

We also got a look at the new Windows 8. A more visual version that takes advantage of the plethora of touch screens available on notebooks, netbooks, tablets, smartphones, and even desktops. This new version has some great features and apps that make the experience even more fun. Windows 8 is available for a limited time for only $39.99 (upgrade). We were also introduced to the Microsoft Wireless Wedge Touch Mouse which adds to the Windows 8 experience. The new four-way touch pad allows you to scroll and navigate in every direction which makes navigating in Windows 8 even easier. It’s small enough to fit in your pocket and works with your laptop, desktop, tablet, and notebook. Connect it to your Bluetooth-enabled device and get busy!

Lunch was a wonderful experience and we had a chance to sample the amazing dessert offerings at Luc. I highly recommend the Pear Gaulette! 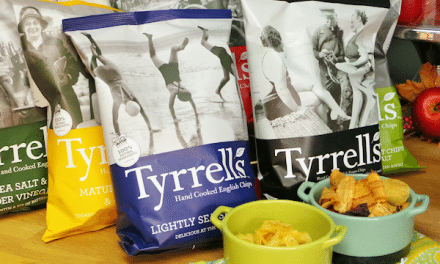 My Pink Flip Ultra Goes Where I Go!

More in Cooking and Food, Technology

Spider-Man on Vudu, Pizza and Friends Make for an Amazing Evening