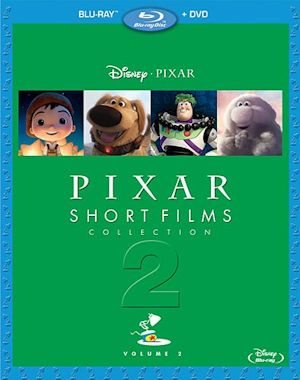 One of my favorite things about new Pixar movies is the short films that they usually have prior to the featured film. Now for the second time Pixar has compiled a Blu-ray collection of 12 of those beloved short films.  The Pixar Short Films Collection: Volume 2 includes Your Friend the Rat, Presto, BURN-E, Partly Cloudy, Dug’s Special Mission, George &A.J., Day and Night, Hawaiian Vacation, Air Mater, Small Fry, La Luna, and Time Travel Mater.

Personally, I enjoy the original shorts that don’t extend from their movies. Although those are amazing, they don’t have the same artistic freedom that the original shorts do since the characters in those are already loved by the people and have a personality that we all expect to see when watching. With the original shorts, Pixar tends to stick to a more musical and sound effected animation. There isn’t much talking if any at all, but you still get lost in watching the art and listening to the beautiful music.

For the shorts that come from Pixar’s original films you can expect to see the personality from your favorite characters shine. I can only imagine that a lot of people enjoy these specific shorts because it gives them another small story from some of their favorite movies. I know for me I enjoyed to watch BURN-E and Dug’s Special Mission because I loved the movies Up and WALL-E and it’s nice to be able to watch a little bit more of those movies that you hoped wouldn’t end. Of course hearing that loving voice of Dug is always good motivation to sit down and watch something.

If you loved movies such as Toy Story 3, Ratatouille, and Cars. You will no doubt fall in love with these short films. All together it’s 75mins of footage, but since they are shorts you can choose to watch as many you would like without having to pause in the middle of a movie. Also the bonus features include some student films by Pixar Directors John Lasseter, Andrew Stanton, and Pete Docter.

If Alex and I can enjoy just a little bit of time to watch these and smile then this would be a good alternative for any parent who is tired of watching the same movie over and over again and just wants a little break with a little something different.

BURN•E – BURN•E is a dedicated, hard working robot that finds himself locked out of his ship and quickly learns that completing a simple task can often be a difficult endeavor. Based on characters from ‘WALL•E.’ (Directed by: Angus MacLane)

Dug’s Special Mission – In this funny short based on the character from ‘Up,’ Dug is sent on a foolish mission by Alpha, Beta and Gamma so that they can hunt for the Bird of Paradise Falls by themselves. Soon Dug discovers that where he belongs is not where he’s been looking. (Directed by: Ronnie del Carmen)

George & AJ – Inspired by Carl’s escape, senior citizens around the city unite to make their own “escapes,” much to the chagrin of George and A.J., in this short that features characters from ‘Up.’ (Directed by: Josh Cooley)

Air Mater – In this hilarious short, Mater decides he wants to learn how to fly and is accidently recruited by an elite group of formation flyers, the Falcon Hawks. (Directed by: Rob Gibbs)

Time Travel Mater – When a clock lands on Mater’s engine, he travels back in time to 1910 where he meets Stanley, the founder of Radiator Springs. (Directed by: Rob Gibbs)

Your Friend The Rat – ‘Ratatouille’s’ Remy and his brother Emile guide fans through world history from a rat’s perspective. (Directed by: Jim Capobianco)

Partly Cloudy – This humorous short features baby-delivering storks who receive their special packages high in the stratosphere, from clouds who sculpt babies and bring them to life. (Directed by: Peter Sohn)

Presto – When Presto, a great turn-of-the-century magician, neglects to feed his rabbit one too many times, the magician finds he isn’t the only one with a few tricks up his sleeve. (Directed by: Doug Sweetland)

Day & Night – This short follows Day, a sunny fellow, who encounters Night, a stranger of distinctly dark moods. As their suspicions turn to curiosity, they are delighted to find that this budding friendship can offer a new perspective on the world. (Directed by: Teddy Newton)

Hawaiian Vacation – Fans will love this “Toy Story Toon,” as Woody and Buzz lead a group of toys in giving Ken and Barbie the Hawaiian vacation of their dreams – without ever leaving home. (Directed by: Gary Rydstrom)

Small Fry – Fans’ favorite team of toys is back in this clever “Toy Story Toon.” Buzz Lightyear is left behind at a fast food restaurant where he finds himself in a support group for discarded toys. As Woody and the gang devise a way to rescue their friend, Buzz tries to escape the toy psychotherapy meeting. (Directed by: Angus MacLane)

La Luna – The timeless fable of a young boy coming of age in the most peculiar of circumstances, in which he discovers his Papa’s and Grandpa’s unusual line of work. (Directed by: Enrico Casarosa)

Read our previous coverage of this fabulous short:

Spider-Man on Vudu, Pizza and Friends Make for an Amazing Evening

Movies: Disney’s SECRET OF THE WINGS on DVD, 3D, and Blu-Ray