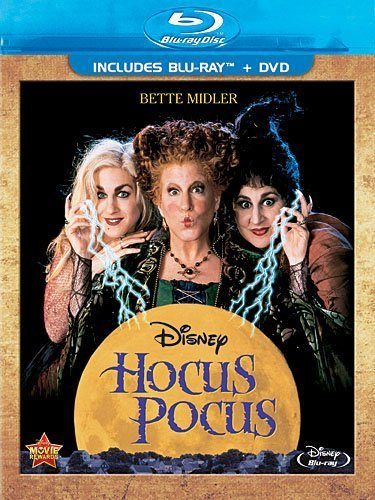 Disney’s HOCUS POCUS  is one of those movies the critics hated and audiences loved. It just goes to show you that you can’t judge a film by its reviews! Disney has just release this 1993 film on to Blu-ray and it’s perfect for some PG-rated family fun this Halloween!

This film marries fantasy and comedy and it makes for 90 minutes of good, scary clean fun. Directed by Kenny Orgeta, it stars Bette Midler, Sarah Jessica Parker and Kathy Najimy. The ladies play three witches who’ve vowed to return to Salem on Halloween night to parse out revenge for a deed that happened 300 years earlier.

They wreak havoc on the townspeople and they only have until morning to recant an ancient incantation to grant them immortality. There’s only one problem. The spellbook has been stolen by Max, played by Omri Katz, a teenager who’s recently moved to Salem from LA.

Thora Birch won an award for her performance as Dani Dennison, Max’s 8-year old sister in the film. She took home the Best Youth Actress Leading Role in a Motion Picture Comedy the year it was released in theaters.

The film is dark and the theme is scary so care should be taken when sharing it with children. It is rated PG and is geared to the teen and adult market. There is some mild language and some themes that could be disturbing to young children.

Happiness – Genetic or Learned Behavior – This Film Says Both