About Dogs: My Gracie and How Her Name Reminds Me to Be Kind to Myself

This is my little Gracie. She’s 5lbs (or so) of spunk. She came into our lives after I accidently killed our rescue dog, Missy.

Days after the accident I felt I needed another pup – not to replace Missy – but to help me with the grieving process. I was mourning the loss of my two children – one to college, the other to his first home away from ours – and now the death of my pet at my hands and the loss was too great.

My sweet husband supported me even though he didn’t want another dog and that’s how Gracie came to be with us. I named her Gracie to remind myself that I needed a little Grace…I didn’t purposely kill Missy and Gracie is my way of honoring her memory.

Missy had a hard life. She was taken from an abusive home and was permanently disabled by the hands of her first owner.  But she was also ill-mannered, not house trained, and only responded to me (when at all). But she was just finally fitting in, and though she put a  considerable strain on our marriage, I couldn’t reject her as so many had before. On the day she died, she went to my husband when he called her for the first time. As I drove off, I was smiling because I thought we’d turned a corner and things were finally going to get better.

Life has a funny way of teaching us lessons when we are least ready to deal with them. What I didn’t know was that when I drove away, Missy panicked and ran toward me. She slipped underneath the back wheels of my 7-passenger van. She was so small; I had no idea I’d harmed her, so I continued on my way to work.

Missy – We fostered her and then adopted her. Her life was much too short. Sadly this photo from the day she was brought to us after being removed from an abusive home is the only photo we have. We didn’t have smartphones or a digital camera back then.

My husband called me to tell me to come home. I had gotten just a few blocks from home. I was in shock as I retraced my route back to where I’d run over my little girl. My husband got behind the wheel and handed me our little girl  wrapped in a towel. I held her ever so gently. She made no sounds. She just looked up at me with wide eyes.

I remember telling her how much I loved her and how very, very sorry I was.  We went first to the closest vet who was so kind and caring. She put in an IV and gave her pain meds. She said it was all she could do for her, and we’d have to take her to an emergency vet. She sweetly said no charge for the care and called ahead to let the emergency center know we were on the way.

We arrived with our pale little girl who looked up at me imploringly the entire time as if to ask me why. I had no answers. Only deep regret and so much love and sorrow all mixed together.

When we arrived the tech walked up to us and said with a laugh, “Is this the pup that got smucked by the car?” While I understand humor can be a way for people who deal with trauma frequently to deal with it, it made me incredibly angry. I looked at her with the tears running down my face and said, “Yes, and I’m the one that did it.” I wanted her to feel the impact her words had on me. Childish? Perhaps, but at that moment, it was all I could do not to smack her for being so unsympathetic.

Blaze, our elderly Brittany sleeping in his 5lb sister’s bed

After talking with the doctor, we decided it was best for Missy to be euthanized. Because she already had back and hip pain from her abuse and now I’d crushed her pelvic bone, she’d very likely never walk again but worse, would be in constant pain. It was only then that I reluctantly said yes to letting her go. I’ve thought about this very moment so many times, and I often think I made a mistake. I try to remind myself that there’s no point in thinking that, but it’s still there.

I’m facing the euthanasia of our oldest dog, and it’s a decision made tougher by my experience with Missy. I’d have to say that she taught me grace in how to live with a dog with special needs. Blaze can probably thank her for my patience in dealing with his illness.

I loved that broken little girl and now I’m broken without her. 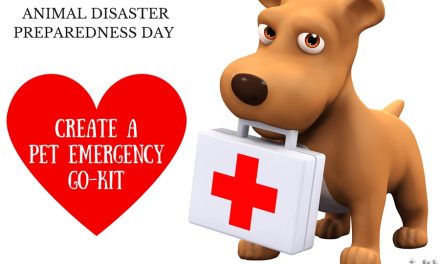 The Baker’s Dog – Quality Treats for Your Favorite Pup

Early Morning Visitor Turns Out To Be a Welcomed Sight