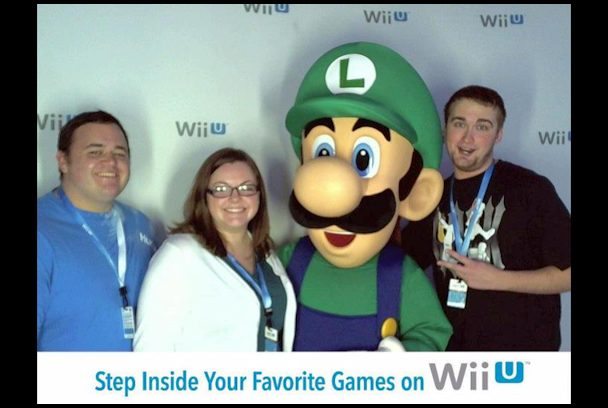 Nintendo is launching a new Wii U Entertainment System that will be available for purchase in mid-November.  Last Saturday my husband, a friend, and I got a sneak peak of the new device at an exclusive preview party in Seattle.  Let me say everyone there had a fun time and we all really enjoyed the new system.

Wii U, the next generation in Nintendo gaming, works with your normal wand and nun chuck with a newly added hand-held touch screen controller.  Now let me say that I didn’t actually play with the new controller – my husband and my friend Eric took over those tasks while we played the new games. The system also works as your entertainment center by allowing you to stream video content from your favorite online provider including Amazon, Hulu, and Netflix directly to your TV. The touchpad itself can display additional content by pushing notifications like box scores, previews for your movie service, and more.

The Seattle Wii U Experience was an futuristic design conducive to game playing and exploring new games.

This new platform is neat but for a traditionalist such as myself, I have a hard time playing a Nintendo DS sized controller while playing a game on TV.  My husband and my friend loved it because there are multiple ways to utilize the new controller.  For example, Batman Arkham City uses the new controller as your toolbelt.  You navigate the game, but when it comes to adding or selecting items, this is where the new controller comes into play.

The new Super Mario Brothers uses this new controller with a stylus pen. The player using this controller can build objects in the game to help the players get to unreachable locations.  Nintendo Land, a similar set up to Mario Party, is loaded with multiplayer mini-games where the controller is used to compete against the other players.

One of my favorite things about this new system is the ability to have up to five players playing on some games.  This is a big step forward in gaming as most consoles will only allow four players to compete at one time.  Another exciting thing is the number of games being released for this system.  Between November and March 2013, Nintendo is planning on launching close to 50 games (source: PC World, 2012).

Here is a list of some of the titles we saw at the Nintendo Wii U system titles we checked out at the Seattle Wii U Experience:

Wii U games are currently available for preorder on Amazon:

Overall the event was fantastic and the experience is unforgettable.  I got to get face-to-face with Luigi and compete head-to-head with my husband and my friend Eric.  This was a blast and we look forward to playing more with the new Nintendo Wii U system.

Michael Jackson The Experience for Xbox 360 and Kinect!

Review: DanceDanceRevolution II for the Wii – Get Fit!

Michael Jackson The Experience for Xbox 360 and Kinect!