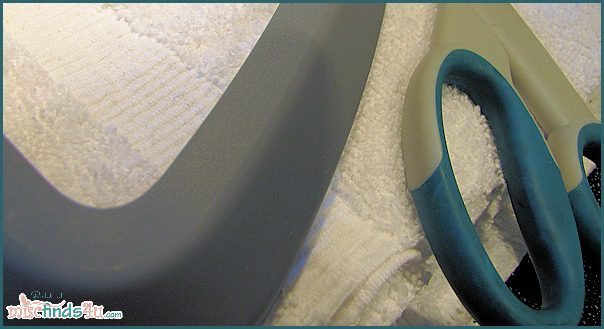 I love my new steam floor cleaner, a Hoover TwinTank Disinfecting Steam Mop (WH20200), but what I didn’t like were the pads that came with it. The pads themselves are fine; they just seemed to always be in the laundry or dirty when I needed them. I checked out Amazon and found that I could buy extra Hoover Enhanced Clean Steam Mop Pads– 2 pack – WH01000) at around $6 each, but I came up with a cheaper solution that’s working fabulously for me!

I took an old, thin white towel and cut it up into eight new pads that didn’t cost me a penny! I chose a white towel so it could be bleached and this particular towel is rough – which works perfectly on my floor – almost like a bit of a scrubby pad. It isn’t as easy to push as the original floor pad (this can be remedied by dampening the pad first), but that actually is working out in my favor. First, because the floor isn’t as wet when I’m finished and second because the floor is cleaner. I keep using towels until I can use a pad that still looks clean after using it. Now I realize what I was leaving behind by using one of the Hoover pads to clean the whole floor – ick!

It seems so simple, but I didn’t think of it until today, so I thought I’d share it with anyone else looking for a solution. I LOVE the Hoover TwinTank steam mop even more now and will be cutting up a second towel soon because it works so well.

Lightened Brandied Pumpkin Pie – A Twist on a Southern Classic