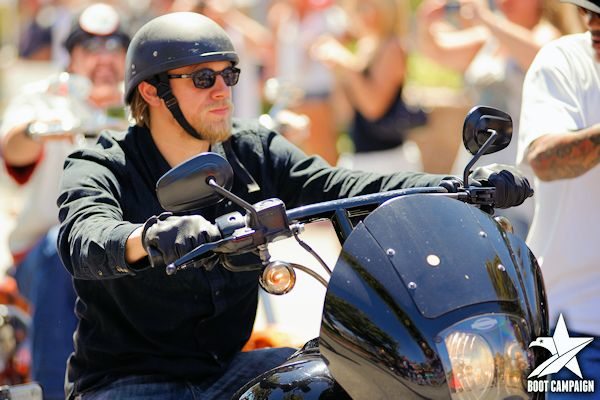 If you haven’t watch  Sons of Anarchy, you’re missing out on a really well-crafted show. Sure there’s violence, language, and occasional nudity, but it’s appropriate for the story. I thought that I’d hate the series but watched in on a whim one Saturday on Hulu Plus and I was addicted from the first episode of season one. Now season 4 is coming out on Blu-ray & DVD and yes, I’ve watched every episode and still love the story.

To celebrate the DVD release, several of the   Sons of Anarchy cast members participated in the 2nd Annual Boot Ride & Rally Event which took place a few days ago on 8/26/12.

The  Sons of Anarchy cast led the motorcycle charity ride of 450 riders with their 300 passengers. The group traveled from the Route 66 Classic Grill in Santa Clarita to Happy Endings bar in Hollywood  Proceeds from the ride, rally tickets, and on-site merchandise benefited The Boot Campaign, which works to raise funds for returning combat military personnel.

You can find out more about the organization and the event by visiting their website: The Boot Campaign

Child Car Safety: Have You Done All You Can to Protect Your Child?

March of Dimes, Kmart and Jillian Michaels Team Up to Support Babies

GLEE PSA: Texting While Driving – 5 Seconds That Could Change Your Life