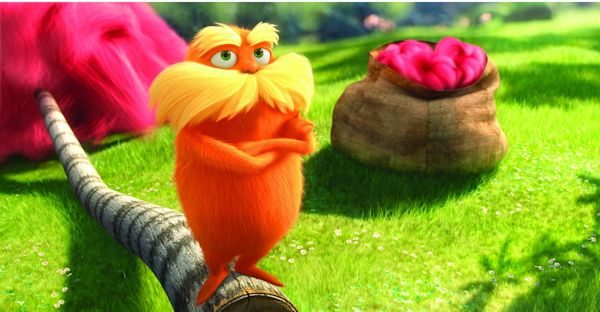 I’m 51 years old and my most anticipated movie of the year has finally been released! DR. SEUSS’ THE LORAX arrived yesterday (8/7/12) on both a Blu-ray™ 3D Combo Pack and a Blu-ray™ Combo Pack (both sets featuring DVD, Digital Copy and UltraViolet™) from Universal Studios Home Entertainment. Seem strange? It shouldn’t. Dr. Seuss was a brilliant writer and the worlds he created have been enjoyed for generations.

In this new animated film, Dr. Seuss’ world in created in a brilliant 3D world by an acclaimed filmmaking team at Illumination Entertainment, the same group who created Despicable Me. The film was directed by Chris Renaud from the adapted screenplay by Ken Daurio and Cinco Paul (Despicable Me, HOP, Horton Hears a Who). The town of Thneedville, is the location of this animated adventure.

THE LORAX stars veteran actor, Danny DeVito (“It’s Always Sunny in Philadelphia,” Twins, L.A. Confidential) as the voice of Lorax, and funnyman Ed Helms (The Hangover, The Hangover Part II, “The Office”) provides the voice the the Lorax’s nemesis, the Once-ler.  Also included in the cast is heartthrob Zac Efron (High School Musical, The Lucky One, 17 Again) as the idealistic 12-year-old Ted who’s searching for the Lorax;  plus the lovely and talented Taylor Swift (Valentine’s Day) as the girl of Ted’s dreams, Audrey;  actor Rob Riggle (The Hangover, Big Miracle) provides the voice of the villainous O’Hare; comedian Jenny Slate (Alvin and the Chipmunks: Chipwrecked, “SNL”) plays Ted’s protective mother; and the incomparable funny lady Betty White (The Proposal, “Hot in Cleveland”) shares her brilliant talent as the wise Grammy Norma. 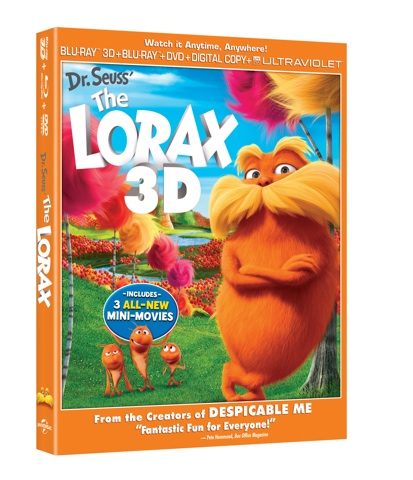 We received the 3D version and it brings the Lorax to life! The 3D Combo Pack includes three new mini-movies including:

BONUS FEATURES EXCLUSIVELY ON THE BLU-RAYTM:

GET OUT OF TOWN GAME — Help Ted navigate through town on his scooter in order to make it to the Lerkim and meet the Once-ler.  At the end of each level, Ted must solve an obstacle puzzle to advance to the next section. There are three levels and three puzzles to complete to win the game.

EXPEDITION TO TRUFFULA VALLEY—Explore and navigate within the Truffula Valley to learn more about how the characters and creatures come to life.

But how’s the movie? Everything I hoped for and more. It’s a sweet movie that I’ll admit to sharing a small tear for. The story is as good today as it was in the 70’s when I first read it. Dr. Seuss is timeless and the movie makers did a great job of recreating the look and feel of the original story.

Pick up THE LORAX – it’s available everywhere. Rated PG for reportedly mild language but it is indeed mild and went unnoticed by myself and two other viewers – we’d rate it G ourselves. 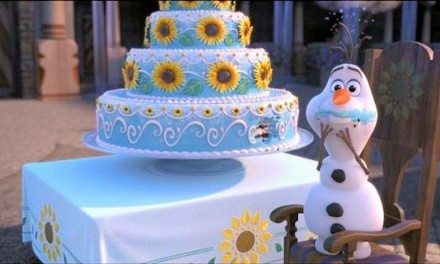