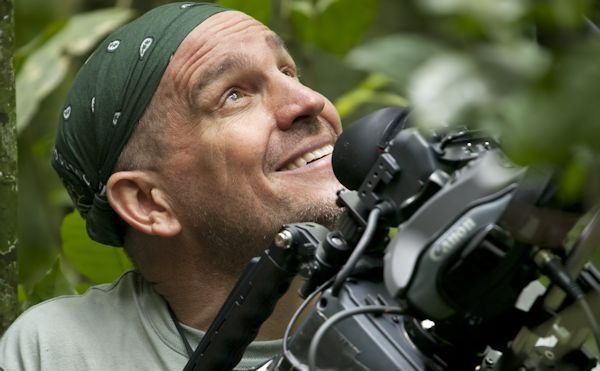 Disneynature’s CHIMPANZEE is a great family film and now it’s available on home video. There’s so much to love about the movie – the location, the cinematography, the look at the life of animals one rarely gets to see; unfortunately, there are some drawbacks as well.

Most notably the choice of Tim Allen as narrator and the often ridiculous and continuous banter used to described what the chimps are thinking and doing. That aside, the film gives us a glimpse into the world of chimps, its heirarchy, and the perils of living in the jungle. As an educational film, it gives a great overview but unfortuatly shares very little information on the why and how of their living.

The bonus features make this a great purchase and where this home video outshines its theater showing. My favorite part of the theatre experience were the pieces behind-the-scene shown during the credits. They showed the extremes the wildlife photographers had to go to to get the story. This I found infinitely more interesting than the movie itself and wished for more. My wish came true in the special bonus feature on the Blu-ray edition.

Chimpanzee on Blu-ray – the bonus features are outstanding

The Blu-ray edition includes several short features that highlight the lengths these incredible nature filmmakers had to go through and endure to bring us this film. They also go into some depth of why the film was made and more about the struggle between the two chimp groups in the film.

Of course they also highlight some of the other creatures of the forest, many they found in their campsite and many which will make your skin crawl. This entire set of behind-the-scenes features are worthy of the purchase price alone.  The bonus features also include “Rise” – a feature showing the McClain Sisters as they shoot their music video. The song is featured in the film.

Like the theatrical release, the Jane Goodall Foundation will benefit from the opening week sales of CHIMPANZEE  through Disneynature’s See CHIMPANZEE , Save Chimpanzees Conservation Program. Every DVD/Blu-ray purchased through 8/27/12 will result in a donation that will help to conserve the chimpanzee’s habitat, work to education our next generation, and provide care for chimpanzees who become orphaned..