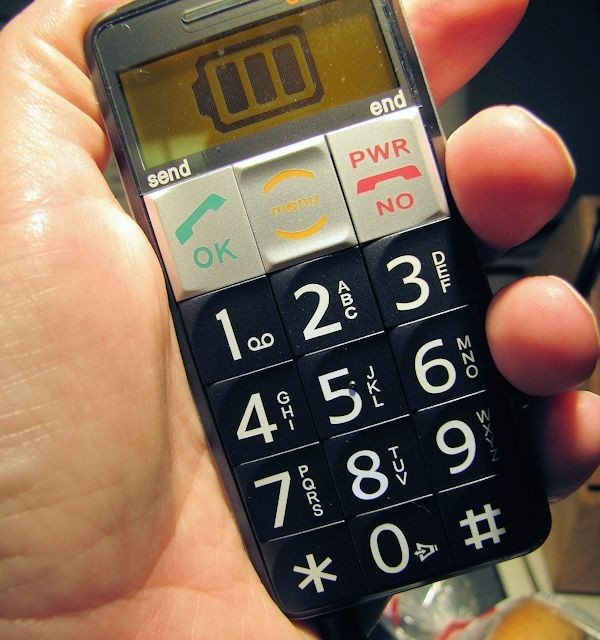 UPDATE 2/19/15 – this phone is no longer available, but there’s a new model with all the same great features – a simple phone without all the technology found on most smartphones – perfect for the people who just want to make calls: Snapfon ezTWO3G Senior Cell Phone, SIMPLE and Easy to Use, SOS Button, Hearing Aid Compatible, UNLOCKED GSM

I guess when AARP starts sending membership cards to you in the mail it’s time to admit you’re a senior citizen. Still, as much as I don’t feel like one on the inside, there are definitely physical changes that are marking the march of time throughout my body. I used to be the one that made fun of old people who asked me to read something for them because they didn’t have their glasses. Now it’s me asking for help. And it’s the hubby who’s hearing has been ruined because of years of riding on a fire engine with the sirens blarring, before they realized that hearing protection was necessary.

So as we get older we have to start admitting it’s time to make changes to make life easier. They hubby has started wearing reading glasses after years of pretending he didn’t need them and I have made the fonts on my computers larger to make reading easier. So to add a cellphone that’s got accessibility features built-in seems a given.

But the hubby is fighting it ever step of the way and here’s why he shouldn’t be:

My husband NEEDS this phone. He’s a technophobe and it’s perfect for him. His current phone is perplexing to him and he can’t even figure out how to get his voicemail. He has texting capabilities but text him and he’ll wonder WTH that blinking icon is, but he’ll never ask or figure out on his own what it is or what it means. Still, even though this cellphone is the answer to my prayers for a phone for him, he can’t get over the senior designation. I think he’s being an idiot. I’d rather be safe and have a phone I know how to work than worry what anyone else thinks of me. Oh well, he’ll lose his phone again soon and this one will be waiting and I promise you, he’ll love it and he’ll evently get over the stigma of being a senior citizen.

Walmart Family Mobile Service – Worth it?

My Pink Flip Ultra Goes Where I Go!