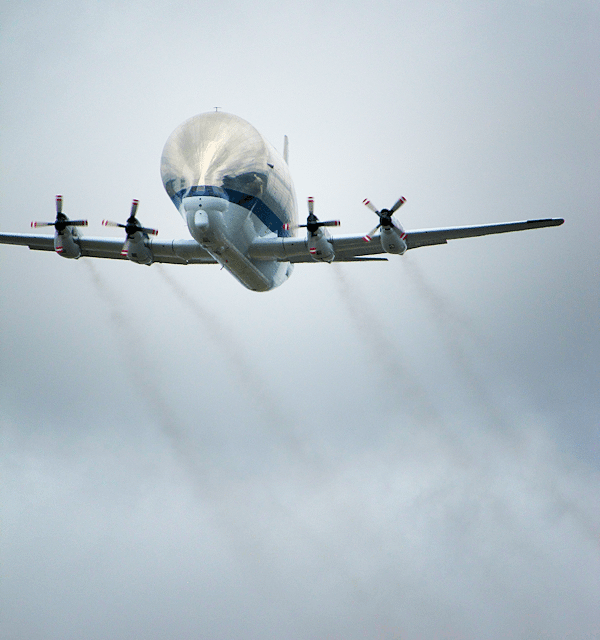 As part of our weekend staycation in Seattle, we joined hundreds of people parked along Airport Way near Boeing Field in Seattle, WA, to wait and watch for the NASA Super Guppy to make its delivery. When the scheduled arrival time came and went, we started watching the people and the trains which in itself was highly entertaining.

The crowd ranged from parents with young kids to old folks like us. The one commonality we all had was a love for the unusual and the NASA Super Guppy plane provided us with a unique experience. When the plane finally came into view through the cloud cover, the crowd’s gaze shifted from the tracks to the skies and a murmur of “It’s here!” came up from the crowd. The big lumbering craft looked a bit like a whale in the sky. Inside the huge hump on its back is a Space Shuttle trainer that will be on display at the Museum of Flight soon in Seattle.

Nearly an hour late, the crowd was rewarded with a low fly over and then it turned and did one more loop and then came in for a landing. The official welcome area was filled with dignitaries including Washington Governor, Christine Gregoire, as well as a marching band and plenty of spectators. As unofficial attendees on the other side of the fence, we enjoyed the flyover and then headed home.

Living in Seattle gives us a chance to see plenty of unique aircraft at Boeing Field is one of our favorite places to enjoy the comings and goings of these winged wonders.

Waiting for the NASA Super Guppy plane in Seattle – 6/30/12 ©MiscFinds4u.com