The green carpet before the BRAVE Movie Premiere

The world premiere of Disney • Pixar‘s animated feature length movie, BRAVE, took place this week in Hollywood and I had the fabulous fortune of attending! Along with 24 other parent bloggers, we walked the green carpet and then enjoyed the movie (for us the second time) with the celebrities, film makers, and their families and friends. This was also the grand reopening of the newly renamed Dolby Theatre and a chance to show of the improvements they’ve made to the luxury theatre (yes, the same one where the Academy Awards are held!). 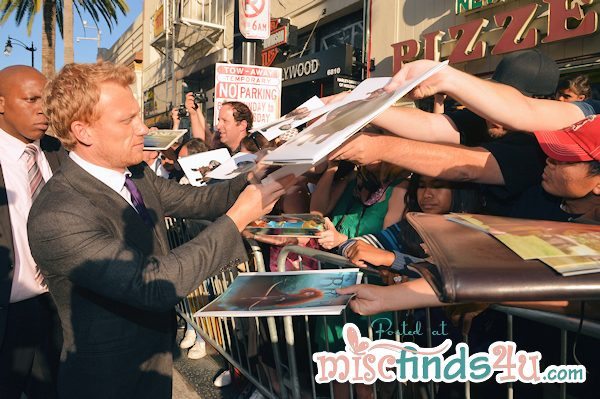 Kevin McKidd – voice of Lord MacGuffin BRAVE – signs for fans at the World Premiere of BRAVE in Hollywood, CA 6/18/12

The emerald green carpet was festooned with huge murals from the movie all featuring the fabulous colors and characters from the new animated film. We walked just behind the celebrities and it gave us a glimpse into what they see at these red carpet events.  A hand-held camera and walking in heels makes for a shaky video, but it gives you a taste of what it’s like for those 3-5 minutes when you’re walking to the theatre entrance and you’re a part of the glamour that is Hollywood.

Behind the Emerald Green Carpet at the Disney Pixar BRAVE Premiere

Special thanks to Louise from Mom Start for her introduction!

After watching the movie (which received thunderous applause at its conclusion), we went up the escalators to the 5th floor for the after party. This is the same location the Governor’s Ball is held after the Academy Awards. The room was resplendent in foliage and tartan plaid. The entertainment included Scottish dancers, a blessing of the Haggis by Craig Ferguson, and a menu that included many Scottish-themed delicacies.

Special thanks to Disney and Pixar for allowing me to attend the BRAVE movie premiere.