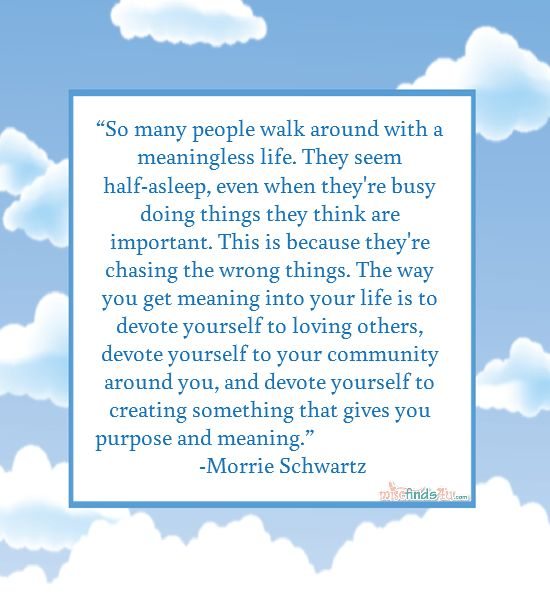 Morris “Morrie” S. Schwartz  was featured in the best selling book by Mitch Albom entitled, Tuesdays With Morrie. It’s one of those books that touched me and stayed with me all these years later and it comes to mind often.

Morrie was an author and Brandeis University sociology professor who contracted ALS. Mitch Albom was a student of Morrie’s and when he heard his professor was ill, he decided to go thank him for being an inspirational teacher. After that meeting Mitch was determined to see Morrie as often as he could and he taped their visits.

The book was created from those tapes and in the audiobook version, which is the version I “read”, it ends with Morrie’s own voice, severly affected by the ALS, but so very touching. I remember the day I heard it – I was driving in my car and I cried. Huge, big, sopping tears so I pulled over in a Dairy Queen parking lot and cried. Not because Morrie died (which he did in 1995) but because he spent that last of his lifetime telling us how we could live our life in a more fulilling way. I like to think it helped me become a person who cares more about people and less about what someone thinks of me.

If you’ve not read Tuesdays with Morrie I highly suggest it. It was also made into a film, which was good, but there’s nothing better than the book.

25 Great Quotes about Life, Growing Older, and Being Happy